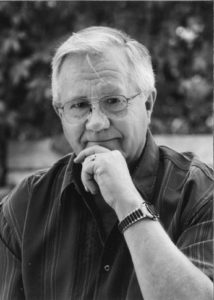 Jerry was born on April 22, 1934 at St. Paul’s Hospital in Saskatoon, SK. He lived in Tessier, SK until he graduated. Jerry obtained his B of Ed from the U of S while working as a surveyor. He taught school at Indian Head, Yorkton and Saskatoon, SK before moving to Lethbridge in 1963. Jerry taught math at LCI and WCHS over the next 26 years. In 1964, he earned his private pilot’s license and was still hoping to skydive this year.

Jerry and Marg met at a Lethbridge Bronco hockey game and later found out it was “a setup” by mutual friends. He always joked that they all still remained friends. Jerry and Marg married in 1978 and over many years, were active supporters of the Bronco/Hurricane teams as season ticket and shareholders. They enjoyed playing crib, Mexican Train and Hearts when they got together with Jerry’s dad, sister and brother. Jerry and Marg had good years of travelling, spending time with friends and were happy just hanging out together at home; still holding hands after over 37 years together.

Jerry had a great interest in WWI and WWII history and travelled to Europe several times. He also loved collecting, telling “Jerry” jokes, reading, cars, beer, peanut butter and apple pie. His favourite song was “Imagine” by John Lennon. He was a diehard Rider fan for over 50 years and a proud owner of “One Class A Share”.

His greatest joy was watching his grandchildren grow up. Jerry cheered them on in all of their endeavours and encouraged them to get a good education. He taught them to play crib and they all tried their best to beat the “master”. His great-grandson RJ, brought him much joy and he loved RJ’s drawings.

Jerry was a big man with a big voice and heart. He faced cancer with a positive attitude and this carried over to the Palliative Care Unit, where he continued to be his cheerful, joking self. He appreciated the staff and called them all by their first names.

Thank you to all the doctors and caretakers who were involved in Jerry’s care. You were exceptional. Heartfelt thanks to Dr. Colin Walsh for your daily visits with Jerry; they brought him so much comfort.

A Celebration of Life with family and friends will be announced at a later date.