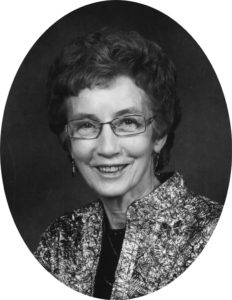 Vilo LAREE Mowers (Adams), of Coaldale passed away peacefully at the St. Michaels Palliative Care Centre on Sunday July 17, 2016 at the age of 75 years.

She is lovingly remembered by her children: Stephen (Debra) Mowers of Medicine Hat and AvaMay (Bill) Marlow of Airdrie. She is also survived by her grandchildren Justin (Danielle) Mowers, Jolayne (Nikolas) Miller; Jodi Mowers; as well as Logan and Layne Marlow. Special extended family near and far; many old and new friends, who were very near and dear to her, and so many wonderful memories of years gone by were reminisced heartfully with many smiles and laughter over the past short months since her illness.

LaRee was born on February 27, 1941 in Lethbridge Alberta to LaVor and Mildred Adams.

As a young girl her love of music with voice lessons, piano and organ studies became one of her lifelong defining characteristics.

In 1961 LaRee met her husband Ray Mowers working at Canada Packers and in the fall of 1966 Ray and LaRee took over the family grain farm in Glenwood, Alberta. During the next 24 years; raising a family in a close knit farming/ranching community gave LaRee much pride and gratitude. Gardening, with huge vegetable crops; vast and varied flower beds; and involvement within the community (contributing to the Glenwood Gleanings paper) as well as bus driving and her work at the United Irrigation District also culminated in her contributions to the history book of this institution; were tirelessly completed with pride. Again her musical contributions were demonstrated as one of the founding members of the “Harmonettes’ a local singing group who quickly became well known for the harmonies, laughter, and beautiful sounds within the community over the many years.

In 1990 LaRee and Ray retired to Coaldale where her gardening, music, and involvement of helping other’s continued. The summers were spent at Spider Lake Springs on Vancouver Island; ocean fishing, berry picking and canning for SO many of us to enjoy the labor of love these activities brought to LaRee – along with tending the ‘community gardens’ at the resort. In the winter LaRee’s gift to ensure that many close cousins, friends, and neighbors were cared for in their ‘latter years’ was a loving gift she maintained as a priority, no matter the need. Her love for her grandchildren was always evident; ensuring that she never missed a swim meet, hockey or baseball game, recital, lake and boating day, graduation or birthday; no matter where she had to travel to see any one of her five grandchildren was a blessing each of them will cherish.

After Rays passing in 2001, LaRee became even more involved with her church; a steadfast member of the choir, learning the handbells and volunteering her time tirelessly with the ‘kitchen gang’ and ‘decorating group’; filled her days. LaRee’s circle of friends both old and new: farm, island, and city – knew of her hard work and dedication to “serving” all those that she could leaving a positive reflection for all of us to cherish.

In lieu of flowers, LaRee and her family request your consideration of a donation to the Canadian Cancer Society.

The family would like to sincerely thank ALL of the staff and care givers at the St. Michael’s Palliative Care Centre. Your respect, time, and caring nature was truly a blessing in the few short months we got to know you all, and the care you provided to LaRee, so very much appreciated.

A celebration of LaRee’s life will be held at the SOUTHMINSTER UNITED CHURCH, 1011 – 4th Ave. South, Lethbridge, on Tuesday, July 26th at 11:00 A.M., with Rev. James Grunden officiating. A luncheon will be held immediately after.

One Condolence for “MOWERS Vilo LaRee”