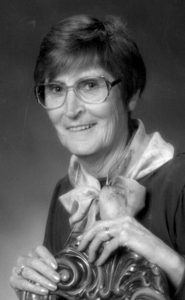 As per her final wishes, Margaret Elaine Haughian (nee Halladay) of Lethbridge, passed away peacefully, after a brief illness at home with members of her family by her side on Saturday, July 23, 2016 at the age of 90 years. Elaine was predeceased by her husband Lee in July of 1996. She is the much loved mother of Marillyn (James) Ikebuchi of High River, Jim (Sharon) Haughian of Lethbridge, Pat (Tom) Bleau of California, Cameron Haughian of Lethbridge and Kelly (Ria) Haughian of Turin. She is survived by ten grandchildren Justin and Ryan Ikebuchi, Clayton and Kelsie Haughian, Nicola Sinclair, Jenny Secrest and Tressa Haughian, Michael, Lisa and Sheldon Haughian and fourteen great-grandchildren and numerous nieces and nephews. Mom would always say “Look what we created all because two people fell in love.” She will be truly missed and always remembered. Our lasting memories will be her enduring legacy. Elaine was born in Riverhurst, Saskatchewan on June 18, 1926 and was raised on a farm in Lawson, Saskatchewan, the youngest of a family of four, predeceased by a sister Charlotte and brothers Arnold and Joe. She married Lee at the family farm on September 3, 1948. They moved to Lethbridge in 1949 and have resided in the Southern Alberta area since that time. She was one of the “Six week Wonders” trained during the war and began teaching at an early age. While working full time and raising a family of five she later went on to complete her Bachelor of Education at the U of L. She taught Elementary school for many years in the rural communities of Travers, Enchant, Turin and Iron Springs. She would joke that it took her 20 years to get out of grade one. She was an excellent seamstress and would sew many outfits for her children. She also enjoyed knitting and crocheting blankets and sweaters for her great-grandchildren. She enjoyed reading, completing crosswords and was an avid TV fan of curling and baseball. A Celebration of Life will be held at 11:00am on Friday, July 29, 2016 at the MARTIN BROTHERS RIVERVIEW CHAPEL, 610 4th Street, South, Lethbridge, Alberta. A private family inurnment was held in the Mountain View Cemetery. For those who wish, memorial donations may be made to a charity of your choice as Mom religiously donated to many groups.