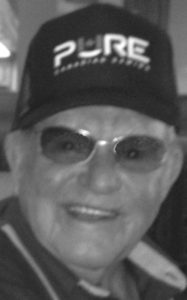 It is with heavy hearts that we announce the passing of Roy Thomas Blenkinsop on Tuesday, July 26th at St. Michael’s Health Centre Palliative Care.

Roy was born on November 21st, 1932 in Ormiston, SK. When Roy was a teenager, his family moved to Moose Jaw, where he met his wife Doris. They were married in 1952, and celebrated their 64th wedding anniversary on July 12, 2016.

Roy owned and operated A&W’s in Moose Jaw, Thunder Bay, and Lethbridge. His passion in life, however, was being a pilot—Roy loved to fly. Later on he also became an auctioneer. Roy was a man of many interests and talents, and we will miss him dearly.

Roy is survived by his loving wife, Doris; his son Keith (Carol); daughters Rhonda (Orene) and Denise (Guy); grandson Brian (Nicole); granddaughter Trista (Matt); and great-grandchildren Kaleb and Preston. He is also survived by his brothers Donald and Robert.

We would like to thank the staff at the Lethbridge Regional Hospital and St. Michael’s Palliative Care for their excellent care for Roy and his family. At Roy’s request there will be no funeral service. In lieu of flowers, donations may be made in Roy’s name to the Canadian Cancer Society and the Diabetes Society.