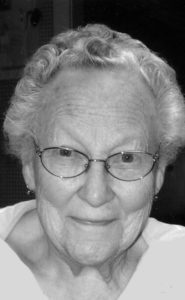 On Monday evening, July 25, 2016, at the age of 94, RUTH JULIA FROMM (nee Minor) passed away peacefully at her home in Raymond, Alberta. Ruth was born in Magrath, Alberta, on April 27, 1922, the youngest and sixth child of Louis and Lillian Minor. She is the beloved wife of Moses Fromm who preceded her in passing at this same time of year in 1994. Ruth was also predeceased by her daughter, Danna (Sanderson, Gary Higa), and her grandsons Brady Fromm and Justin Jensen.

Ruth and Moses were the owners of Fromm’s Jewelry, on Main Street in Raymond, which they operated with Moses’ parents. They lived happily above the jewelry store with their 12 children for all of their married life. Their home was filled with not only their children and grandchildren, but also many happy friends who contributed to the friendly, welcoming atmosphere. Ruth lived nearly her entire adult life above the jewelry store and was determined to die there, which she was able to accomplish.

Ruth was a practiced and accomplished cook and her meals attracted and satisfied many visitors. She was an active member of The Church of Jesus Christ of Latter-day Saints, which gave her many opportunities to serve and love others, including her friends at the Marigold Manor.

Interment to follow in the Temple Hill Cemetery, Raymond.