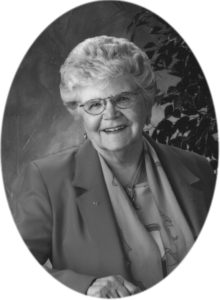 MARGARET RUTH HOLTMAN (Kjeldgaard), passed away peacefully on Sunday, July 24th, 2016 at the age of 101 years. Throughout her many years she experienced the true circle of life – the joys of watching her family grow and the sad loss of loved ones.

Margaret was the youngest of six children born to Anna & Peter Kjeldgaard. Peter Kjeldgaard emigrated from Denmark to Minneapolis, Minnesota in 1881 and Anna Jorgenson moved to Luverne, North Dakota from Denmark in 1887. After their marriage, and the birth of Ludwig, Thomas, and Harvey, the family moved in 1909 to Bow Island where Esther, Gladys, and Margaret were born. In 1915 the family moved to Valley City, North Dakota and ranched until 1925 before returning to Bow Island. Margaret was the last surviving child of Anna and Peter Kjeldgaard.

It was in Bow Island that Margaret completed her schooling and married her high school sweetheart, Roland James Martin in 1937. Margaret and Roland farmed at the south edge of town and appreciated life with their four children: Lorraine, Muriel, Richard, & Dalyce.

Margaret was predeceased by Roland in 1965. She later sold the Bow Island farm and moved to Lethbridge with her daughter Dalyce. After 6 years of working various jobs, she met and married Bill Holtman and they enjoyed travelling together until his passing in1980. Margaret was also predeceased by her daughter Lorraine Hamel, and three grandchildren, Leanne Hamel, Trevor Martin, and Robert James Martin. She is survived by daughter Muriel (Norm) Williams of Foremost; son Richard (Moyra) Martin of Calgary, and daughter Dalyce (Jim) Thacker of Lethbridge.

She will be sadly missed by her three children, seven grandchildren, and 15 great-grandchildren as well as numerous nieces and nephews. Family meant everything to her, and she meant the world to all of us.

Sincere gratitude goes to her family physician, Dr. Greidanus, and many of the staff at Fairmont Extendicare for the loving attention given to her especially in her final days.

Margaret will be laid to rest in the Hillside Cemetery in Medicine Hat beside her husband Roland Martin.