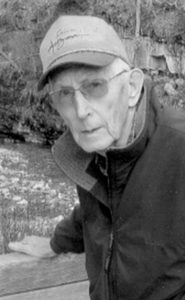 ANGUS “AGGIE” THOMAS DUNCAN, of Lethbridge, beloved husband of the late Mildred Duncan, passed away peacefully at the Chinook Regional Hospital on Thursday, July 28, 2016 at the age of 87. He is survived by daughter Janice Duncan and sons Warren and Brian Duncan; grandchildren Bryce, Kyle and Keri Duncan; brother John Morgan his children Ryan (Mandy) and Ashley Morgan; good friend Neville (Adele) Downs; and his beloved feline companion Miss Kitty. Angus was predeceased by his wife Mildred; sister-in-law Donna Morgan; mother Ann Morgan and step-father Fred Morgan, as well as numerous aunts and uncles. Angus grew up in Hardieville, but eventually made his way to Foremost where he met the love of his life Mildred Hansen. After they were married they farmed for a time S.E. of Foremost. When farming turned out to be unprofitable Angus sold the farm and took a job with United Grain Growers (UGG) as a grain buyer in 1964, and stayed with the company until he retired in 1991. Working for UGG took him to Taber, Jefferson and Lomond. When he retired mom and dad bought a house and moved to Lethbridge. Dad loved fishing, listening to the bagpipes, going to Waterton, and tending to his yard and garden – especially his roses, gladiolas and tomatoes. Dad had a very soft spot for animals as was evident by all of the pets we had over the years. He also was a long time season ticket holder of the Lethbridge Hurricanes, loved the Edmonton Oilers and rodeos. The family would like to thank Dr. Li; Dr. Narula and the wonderful nurses in 4B who took excellent care of dad. Keep your powder dry dad! At Angus’ request there will be no funeral. In lieu of flowers, memorial donations in Angus’ memory may be made to the Lethbridge and District Humane Society, 2920-16 Ave. North, Lethbridge, AB, or to a charity of one’s choice.