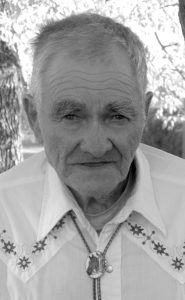 ALLEN CLARENCE HOLTHE, beloved husband of Marie Holthe passed away early Sunday morning, July 31, 2016 at the age of 83. Allen was born and raised in Turin, Alberta. The eldest child of Clarence and Helen (Bjornson ) Holthe, Allen chose to live and raise his own family in the community of Turin. He married Marie Wright on November 25, 1960 and they worked hard together farming, gardening, and raising a variety of livestock. Allen and Marie had six children who were taught from an early age the importance of hard work and personal responsibility. A hard worker to the day he died, Dad was getting ready to go “do chores” on Friday morning when he suffered a stroke. It is with sadness but satisfaction that his family notes he was able to leave this life as he always said he would – “with his boots on.” Allen leaves behind his wife of 55 years, Marie and six children: Lorri (Wallace) Smart, Clancy (Cynthia) Holthe, Penni Kiss, Wendi (Greg) Smart, Virginia Holthe and Dorthea (Duane) Mills. Allen found extreme joy in his posterity and was delighted to be grandfather to 19 grandchildren and most recently, 8 great grand children: Diana (Grayson) Michel and Logan, Angela (Dylan) Morgan and Kara and Eero, Sara (Ben) Toone and Jane, Jordan (Sara) Smart and Jacob and Benjamin, Katie (Nathan) Koegler and Henry, Damaris Holthe, Melodie (Travis) Babb, Curtis Holthe, Calvin Holthe, Devanie Kiss, Bradley Kiss, Douglas (Clarissa) Kiss and Emmitt, Jeffrey Kiss, Micaela Kiss, Alexis Smart, Jessica Smart, Kaitlyn Mills, Chelsey Mills, and his little buddy, Christopher Mills. Grandpa was also looking forward to the birth of two more great grandchildren this fall. Farming was Allen’s chosen profession. He proudly proclaimed that he got his first CWB card at the age of 14 and was actively involved in many farm related organizations; the UFA, UGG, sugar beet board, etc. He was a 4-H leader for many years. He was inclusive believing that every kid deserved a chance to have some form of success. His market garden was well known throughout southern Alberta and his children grew up gardening and marketing tons of corn and cucumbers. Although Allen had very little opportunity for formal education, he was committed to educating his children. Attending school was never optional and he was very proud of the academic successes of his children and grandchildren. Dad was a prolific reader and if he wasn’t working, he was reading. Throughout his life, Dad took college and continuing education courses. He believed in contributing to the community and encouraged political awareness in his family. He never missed a chance to exercise his right to vote and expected nothing less from his family. Allen was a man of faith his entire life and embraced the gospel of Jesus Christ on his own terms. He was a member of the Church of Jesus Christ of Latter-day Saints and was pleased to see his children and grandchildren living respectable lives, noting often that it was a blessing to be the father of “good kids.” Allen was predeceased by his parents, Clarence and Helen Holthe and his brother Charles Holthe. He leaves behind his brother Larry Holthe, sister, Shirley Oseen and sister-in-law Gracemary Holthe, as well as numerous aunts, uncles, nieces, nephews and in-laws. He found comfort in knowing that “families are forever” and anticipated the promised reunion with pleasure. Visitation will be held at Christensen Salmon Generations Funeral Home (703-13 Street North, Lethbridge) from 7-9 pm Wednesday, August 3, 2016. Interment will take place at the Magrath Cemetery (south of Magrath, AB on highway 62) on Thursday, August 4, 2016 at 11am. The funeral will follow at 2 pm at The Church of Jesus Christ of Latter-Day Saints in Picture Butte, AB. In lieu of flowers, memorial donations may be made in Allen’s name to the 4-H Foundation of Alberta, RR1, Westerose, AB, T0C 2V0.