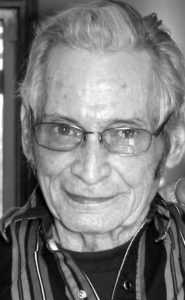 Sam Bianchi, son of the late Nick & Hilda (Ness) Bianchi, passed away at age 75, on Friday, August 5, 2016 at West Highland Centre in Lethbridge, AB with his siblings by his side.

He was predeceased by son Darren in 1968, his parents Nick and Hilda Bianchi and sister-in-law Dorothy (Tom) Bianchi.

Sam was born a cowboy, with a guitar in his hands and a song in his heart. He was passionate about country music, especially that of Merle Haggard and George Jones. His children remember fond moments of him entertaining them with his voice and guitar. Sam was born Nov. 16, 1940 on the family farm at Aden, east of Coutts, AB, the youngest of 5 children. School days were spent at Grassy Butte and Grain School. After grade 10, Sam helped his dad on the farm then worked at Ross Ranches. He later moved to Milk River where he worked for Paul Madge at the IH Garage. Nov. 7, 1964, he and Dianne (Di) Hummel were married in the United Church at Milk River, AB and remained together for 12 years. They began farming north east of Milk River. Shortly after, they relocated to Calgary where he became employed at a dry-cleaners, then Rundle Floors working for Rudy Miller (Harvey Miller’s brother), then dry walling for Bob Rennie, and lastly as a Commissionaire. Sam had given Di four wonderful children and a lifelong connection to the extended Bianchi family. Sadly, their 2 yr. old son Darren died of a croup attack in 1968. He was intensely proud of his children, spending time with them whenever possible. Sam was later married to Wendy Hendricks from 1980 – 1988. They resided in Flatbush, AB, where he and his brother Cecil, ranched for a few years. Sam later moved to Lethbridge, AB where he was also a caregiver for his mom Hilda, until she passed away at age 95.

His last years were spent comfortably at West Highland Centre which became a home he truly loved. The staff became his very good friends and felt like family to him. He loved them very much. He became the respectable, dependable last of the old cowboys.

Sam will always be remembered as a person who never left you feeling cold – be it with his thermostat or his sense of humour.

Cremation Resting Place at Archmount Cemetery, at his parent’s and son’s grave.

Sam touched many lives, however the family would appreciate a Private Funeral to be respected.

One Condolence for “BIANCHI, Samuel”