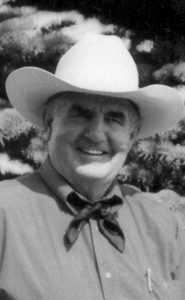 GORDON FAWNS HEGGIE (86) passed away peacefully on July 27, 2016 in Las Vegas, Nevada. Born January 8, 1930 in Raymond Alberta Canada to James Velv and Lauretta May Fawns Heggie. Dad attended school in his hometown of Raymond and then continued his education at Brigham Young University. His love of the gospel lead him to serve a mission in the Perth Australia Mission. On March 18, 1953 he married his grade school sweetheart, Aneta McBride in the Cardston Alberta Temple. Together they raised 9 children: Wendy (Rick) Excell, Washington, UT; Randy (Patsy) Heggie, Del Bonita, AB; Darcey (Delores) Heggie, Porterville, CA; Tammy (Robert) Brandley, Seattle, WA; Sonya (Chris) Wilcox, Las Vegas, NV; Tonya Meyer, Henderson, NV; Todd (Laurel) Heggie, Claresholm, AB; Tedd (Julie) Heggie, Ely, NV; Mark (Mona) Heggie, Cardston, AB. They were blessed with 35 grandchildren and 40 great grandchildren. Dad spent his life as a ranch manager on ranches in California, Oregon and Alberta. This lifestyle allowed him and Aneta to teach their children the benefits of daily chores, responsibility and hard work. Family was very important to dad and he taught us that our best friends lived under the same roof. As grown-ups we are still best friends. Dad supported us in many ways and built a strong family bond while helping us in the rodeo arena, conquering school projects, competing in school sports or spending days in the saddle teaching us about horsemanship, husbandry and hard work. Dad had a love for long days in the saddle on a young horse and working with good dogs. Aneta passed away on May 6, 2007 and he later married Ruth Graham Swinney. Together they split their time between their homes in Las Vegas and Claresholm spending time with family in both places. He is predeceased by his wife Aneta McBride, Grandchildren Natasha Meyer, Jedd Heggie and Travis Excell, brothers Max, Doug and Dean and his sister Romona Geremia as well as his parents. He is survived by his sister Evelyn (Steve) Prokop. The Funeral Service will be held at The Church of Jesus Christ of Latter-day Saints, RAYMOND STAKE CENTRE, Raymond, Alberta on Saturday, August 13, 2016 at 11:00 a.m. Friends may meet the family prior to the service from 9:45 to 10:45 a.m.

One Condolence for “HEGGIE, Gordon”