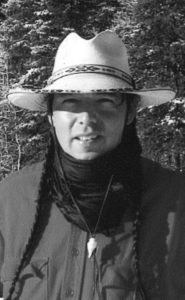 OKAN HUNGRY WOLF made his departure for home to the happy hunting grounds on Wednesday, August 3, 2016 at the age of 43 years. He chose to go soar with the eagles in the mountains he so loved.

Okan was born June 25, 1973 and lived his years between the family homestead near Skookumchuck, B.C., and the Blood Reserve where family and ceremonies often called. He was raised in a household rich with his culture. His upbringing, surrounded by nature, influenced Okan’s lifelong love of living as one with the natural environment. His home was the many camps he made throughout the countryside often accompanied only by his horses and dogs. Okan was proud, quiet and deep of spirit, humble and respectful of others.

His formal education was achieved through home schooling by his parents and throughout his lifetime he continued learning teachings of niitsi’tapi – the real people. He was first painted by Willie Scraping White Makkoi’yapii who gave him the name Matsi’staayo’towa. He was painted by numerous noted elders. As a child he spent much time with Moka’kin (Pat Weasel Head). He began receiving transfers of various rites at the tender age of three, when he became a nii’namskaan, receiving the sacred topknot for the Mountain Medicine Pipe. He was transferred a straight-up headdress by Tom Morning Owl, a weasel shirt by Larry Plume and numerous other sacred articles. At the age of 12, he became co-owner with his family of the Beaver Medicine Bundle. At 23, he sat holy with Itsspo’wanaato’ komi / Stella Tallman for the Okan, or Medicine Lodge at the Kainaiwa Sun Dance, a partnership for six Medicine Lodges. For 12 years, he learned the Okan ceremony with Pi’kunii Sun Dance leader Mike Swims Under, who also transferred him rights to the Kit Fox Society, when Mike became his grandfather. Okan also learned the songs for the Thunder Medicine Pipes and Beaver Bundles and throughout his lifetime helped his father lead these ceremonies. He also partook in Brave Dogs Society for many years. At Taos Pueblo in New Mexico, he was given a corn planting ceremony by adopted grandfather Pat Romero, with whom he spent much time while learning their ways. Okan loved the mountains. He grew up in them and spent much of his life hiking, climbing, riding, guiding and establishing camp sites. He referred to himself as ‘a Survivalist Technician’ and prided himself in being able to live in the mountains in a tipi at any time of the year. He was a skilled huntsman and archer. He had expert knowledge of the fauna and plant life native to this land, as he learned from his studies at the Universities of Lethbridge and British Columbia. While studying at UBC, he designed his own course, titled ‘Native Ecology’ and used this knowledge as he worked for the Blood Tribe Lands Department. During his employment with tribal lands, he carried out various research for extended periods at the Timber Limits/Beebe Flats from where he led excursions and summited Chief Mountain many times.

He was an artist both drawing and painting; a craftsman using traditional Blackfoot materials and design. He was also a photographer, videographer, illustrator and writer, co-authoring several books with his father and accompanied him on many journeys throughout the world. Among his passions were cars, trains, sail boating and fishing. He was a singer of ceremonial songs and an old time Chicken Dancer, spending many hours with his Uncle Tony Black Water practicing dance moves. With his younger brother, Iniskim, he learned about life, working together at jobs such as bee keeping, logging, horse training, inventing and building. They recently competed with their horses in Indian relay races and worked as extras in numerous films and television programs. He was a snowboarder and an avid runner, covering vast distances on the reserve. He ran many marathons and at the last Moonlight Run, won a silver medal. Recently, he was Interpreter and Wagoneer at Fort Whoop-Up in Lethbridge.

Okan was often seen traversing Standoff in his wagon behind his team of Spanish Mustangs while surrounded by many children and dogs. He will be forever missed by his children whom he loved beyond words. He leaves behind family and friends with whom he left a lasting impression. The loss of Okan imparts one to live life fully and love with no bounds in the fragility of life.