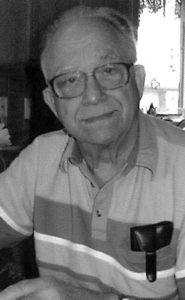 Mr. Edward Wojtowicz, beloved husband of Martha Wojtowicz, passed away after a lengthy illness on Sunday, August 7, 2016 at the age of 86 years. Edward was born on February 2, 1930 to Walter and Maria Wojtowicz in Alonsa, Manitoba, on the homestead. When Edward was 6 years old, the family moved to Diamond City and in 1942 moved to Lethbridge where he attended St. Basil’s and St. Patrick’s schools. His first job was at Niven Brothers then continuing employment with Lethbridge Iron Works, Canadian Sugar Factories in Raymond and Picture Butte and later as a Maintenance Supervisor at Lethbridge Community College, retiring at age 65. On June 9, 1956 he married the love of his life Martha Gaetz, who were blessed with three children: Denise (Tony), David (Victor) and Larry (Gina), step-grandchildren Jen (Gordon), Justin and step-great-grandson Tristan. In his youth he played soccer for the Lethbridge Legion Team, enjoyed bowling and traveling to Galiano Island for summers and Christmas. He loved spending time tending to his gardens. He also enjoyed various hobbies and doing crossword puzzles with Martha in his later years. Edward is survived by his wife and children, sister Helen (George) Dolbak; brothers Anthony (Tina), John (Charlotte), Carl (Colleen – deceased); and sister-in-law Dorothy (Stanley – deceased); as well as many nieces, nephews and great nieces and nephews. Edward is predeceased by his parents Maria and Walter, brothers Joe (Evelyn), Eugene (Connie), Adam and Frank. In lieu of flowers, memorial donations may be made to the Canadian Diabetes Association, 204, 2323 -32 Ave NE, Calgary, AB T2E 6Z3. Funeral arrangements will be announced when completed.