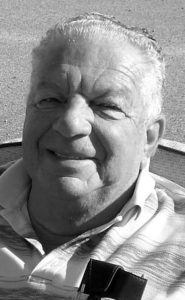 James Norman “Jim” Killoran, beloved husband of Rosemary Killoran, passed away peacefully on August 8, 2016 at the age of 78 years. Besides his loving wife Rosemary, Jim will be lovingly remembered by his children Mike (Louann) Killoran, Marrilynne (Ryan) Harry, Dan (Waco) Killoran, Kimberley Coonfer; five grandchildren Johnathan (Diane), Evan, Jamee, Shanae and Kenzie; brother Terry (Iris), sister Alexis (John) Wiigs and sister in law- Edna Killoran as well as numerous nieces, nephews, and other relatives. Jim was predeceased by his first wife Kay, father Alex, his mom Gladys, and his brother Orley. James Norman Killoran was born to parents Alex and Gladys 1938. He served in the Royal Canadian Air Force and was stationed in Halifax. In the 1970’s, Jim was employed by Pincher Farm Equipment, and soon with his brothers, Orley, and Terry, they bought the company. Jim was active in the community, belonging to the fire department for 20 years and was chief for 7 years. He was a proud supporter and member of the Royal Canadian Legion. In later years, Jim owned Pincher Safety Services and serviced the surrounding communities with locks & alarms. Jim was not afraid to take on any challenge, and was very handy around the house, and garage…….. Unfortunately, he did not pass on these skills to all of his children. If he could not repair something, it was not worth fixing. He traveled to a number of different places, to both the east & west coast of Canada, United States, Europe, The Bahamas, Jamaica, Hawaii, and Cuba, however he most enjoyed traveling to family & friends camp sites. Jim was a friendly man that was well known and numerous people would seek out his advice. Jim spent the last few years camping & visiting with friends & family, and recently discovered the wonder of online shopping & Amazon.ca. The one thing that never changed for the last 53 years – Jim & Rose were inseparable doing almost everything together. A Memorial Service will be held at The Royal Canadian Legion Branch #43 (691 Main Street, Pincher Creek) on Friday, August 12, 2016 at 2:00pm. Memorial Donations in Jim’s name may be made directly to a Charity of Ones Choice.