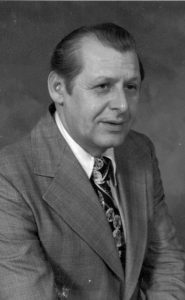 Mr. Richard Husch, husband of the late Wilma Husch, passed away on Tuesday, August 9, 2016 at the age of 82 years.

Richard was born in Oeisheim, Germany to his parents Peter & Elfriede. Richard’s family immigrated to Canada in 1953 and eventually settled in Lethbridge in the early 60’s.

Richard is predeceased by his wife Wilma; his son Daniel; and his parents.

Richard took great pride in his sons, their wives and especially his grandchildren.

Richard had a passion for gardening and enjoyed camping, fishing and most sports, but he especially loved soccer and curling. He enjoyed spending time with family, friends and members of the German Canadian Club.

A Celebration of Life will be held at 11:00am on Monday, August 15, 2016 at MARTIN BROTHERS RIVERVIEW CHAPEL, 610 – 4 Street South, Lethbridge, AB., with Reverend Trevor Potter officiating.