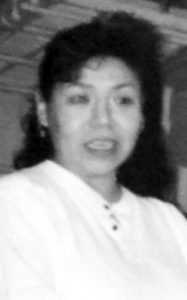 It is with great sadness and a heavy heart that we announce the passing of a wife, daughter, mother, sister, auntie, cousin, and a friend. SANDRA JOY MANY CHIEF passed on into the spirit world to begin her new journey with our creator on July 20, 2016 at her home in Surrey, B.C at the age of 44. Sandra was born in Yakima Washington, USA on January 28, 1972 to the proud parents of Cecil Many Chief and Mary-Rose (Big Sorrel Horse) Many Chief. From birth Sandra and her parents travelled into the U.S, southern Alberta, and to British Columbia seeking employment. Eventually they settled in Alberta on the Blood Reserve where Sandra and her siblings started their education. They attended school on the Blood Reserve, as well as Lethbridge, Alberta. During this time she was living amongst her relatives, Sandra attended many pow-wows, family outings, and the Sundance with her relatives. As a child, Sandra grew special bonds with some of her family whom she took as a brother or sister. Going into her teen years, she moved to Vancouver with her mother and siblings where they often travelled to different areas of B.C to seek employment during the summers and into the fall. Sandra had good work ethics which she gained through watching and learning from her aunties, uncles, mother and, younger sibling, which she passed down to her family as well. Sandra made friends easily because of her good nature and sense of humour. Sandra had a lot of love and a big heart for everyone she came across, some she would not know, but was always willing to give what she could, especially to those that we’re in need or less fortunate. Towards the end of her life Sandra and her husband Darren Murphy raised their niece/daughter Jessica Many Chief (Brown) where she got more in touch with her cultural side.

Sandra met Darrin Murphy, the love of her life, around June of 2001. Together, they started to build a home and family. They both worked hard to maintain their home, and in their free time, Sandra and Darrin would often go for drives to go sightseeing, if not camping or family outings, always along with her mother, siblings, nieces and nephews.

Sandra and Darrin lived in Surrey, BC for the last 13 years. During these years, Sandra graduated from Culinaary Arts. She loved cooking and preparing different dishes. She later took numerous parenting courses when the second love of her life was born – Little Jessica Many Chiefs/Brown. (Her niece) She pursued guardianship which was granted. From there, they took little Jessica to raise as their own child. She often spoke fondly of her Jessica, planning her future with Darrin and her daughter. She enjoyed teaching and showing little Jessica about our traditional ways and culture. She loved her mother dearly and also cared for her. She loved and was proud of her siblings, nieces & nephews and tried to help them with their lives as they they were starting to graduate and encouraged them to pursue their education. She was part of the Aakaipokaiksi Clan of the Blood Tribe.