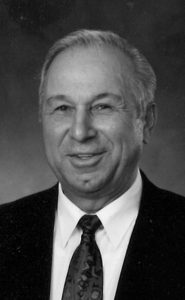 It is with great sadness that we announce the passing of Wesley (Walter) Shaskin on August 8, 2016 at the age of 89 years. Wesley was a loving husband, father and grandfather who will be missed by everyone who knew him. He leaves behind his wife Olga and children; Igor (Julie) Shaskin, Laura Shaskin, Linda (Steve) Hirlehey, all of Lethbridge, and beloved grandchildren Andrew and Evan Shaskin and Samantha Hirlehey. He also leaves behind his sister-in-law, Vera Shaskin, as well as numerous nieces, nephews and their families. Wesley was pre-deceased by his grand-daughter Madison Hirlehey and his brothers, John Shaskin and Stephen (Helen) Shaskin.

Dad was born January 22, 1927 in Mariupol, Ukraine, a small town in a Greek colony not far from the Black Sea. Born to Constantine and Elizabeth Shaskin, he was the youngest of three boys. Life changed drastically with a Communist regime and a World War. These world changing events were a threat to a family raised on the ideals of freedom and democracy. Along with his parents and brothers, Dad fled his homeland in 1944. They made their way through several war torn countries, mountainous terrain and the threat of capture by Nazi forces. They set their sights on reaching Allied forces, first meeting the U.S. forces leading the advance east. Unfortunately, during that trek Dad saw the loss of his mother in Graz, Austria.

After some time in Munich, Germany at a U.S. Military base, father and sons found passage aboard the Greek ship S.S. Nea Hellas leaving from Italy and a placement in southern Alberta, contracted to work on a farm. In May 1950, Dad and his family arrived in Canada through Pier 21 in Halifax, along with many other immigrants. They carried with them few belongings, a strong work ethic, the hopes and dreams for a better life and an entrepreneurial spirit that would define that generation.

That contract to work ‘on the beets’ soon became a job swinging a hammer high in the rafters of the grain elevators that sprung up all over Alberta. With money earned, brother John first left to purchase a gravel truck. This eventually led to an opportunity for the purchase of a small construction company located in Parkland, from Ira and Phyllis Jones. In November 1963, Walter along with brothers John and Stephen, became partners in Willow Creek Sand & Gravel Co. Ltd. which continues to operate as a family business today. Dad met Olga Zuk at a wedding where they were both in the bridal party. They dated and in February of 1955 they wed, celebrating 61 years of marriage this past February.

Most of his life he was working six days a week and on the road, so his past-times were simple. “Hockey Night in Canada”, meant settling down in his easy chair and cheering on his teams. He had a passion for discussion. He loved to sit down, a rum and coke in hand and discuss the current events of the day. He didn’t have hobbies but had many talents from ballroom dancing to arm wrestling! Dad loved traveling to Hawaii every February with Mom. Relaxing by the pool, soaking up the sun and spending time with his friends and the Hawaiian regulars. The only bad thing was missing the grandkids so much!

Dad was devoted to his family. When he retired from his business at the age of 74, his life was focused on advising, helping and supporting the family he loved so dearly. This might have been in the form of giving business advice to his son and daughters, teaching a grandson to drive, taking a grandson to a hockey game in some far off town in the dead of winter, entertaining a little granddaughter while she lay in her hospital bed or picking up a little granddaughter from school at the end of the day. He always supported his son and daughters in their own ventures, later doing the same for his grandchildren. He attended every game, concert, play or event he could. He proudly cheered on his grandchildren. He was there for them, always.

Dad was an example of what a man should be; good and kind, strong and loving, hard working and dependable. He was a man of integrity and a man of his word. He lead by example and he instilled these valuable qualities in his children and grandchildren. We love you and we will miss you ‘Deid’, always.

We would like to express our thanks to Sharon Penton RN, and all the staff at Adaptacare, Cedar Creek for attending to Dad’s needs in his last weeks. Your professionalism and sincere kindness was truly appreciated.

A Funeral Service will be held at 10:00am, Tuesday, August 16, 2016, at MARTIN BROTHERS RIVERVIEW CHAPEL, with RT. REV. FR. Taras Krochak presiding.