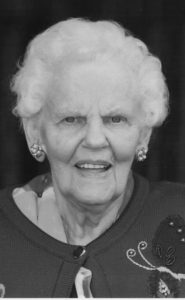 VIRGINIA CROOK beloved wife of the late Francis Crook passed away at the St. Michael’s Palliative Care Unit on Thursday, August 11, 2016 at the age of 86 years. Virginia is survived by her children: Doug (Cathy) Crook of Pincher Creek, Joanne (Allan) Crook of Priddis, Byron (Cyndie) Crook of Stony Plain, and Stan Crook of Lethbridge. She is also survived by son-in-law Murray (Charlotte) Taylor of Winnipeg. Virginia is survived by 9 grandchildren,13 great grandchildren, sister Marion Petersen and a cousin and special friends Mary and Marty Hyder. Besides her husband Francis Crook, Virginia was also predeceased by her brother Gordon Carlson, her daughter Bev Taylor, and grandchildren Corey and Stefanie. A Memorial Service will be held on Wednesday, August 17, 2016 at 1:00 p.m. at CHRISTENSEN SALMON GENERATIONS FUNERAL HOME, 703-13 Street North, Lethbridge. Memorial donations may be made to Southern Alberta Community Living Association, 401-21 A. Street North, Lethbridge, AB, T1H 6L6 or to the Special Olympics Alberta, 230-207-13 Street North, Lethbridge, AB, T1H 2R6.