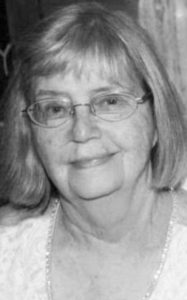 SANDRA JOYCE FOLLIS (JUDD), of Raymond, Alberta, returned to her Heavenly Father on August 11, 2016 at the age of 74. She was predeased by her parents Charles and Grace Judd and by her big brother Gilbert.

Sandra had a deep love for people and she lived her life in service to others. It was not uncommon for Sandra to be found working outside of the spotlight on doll clothes, Christmas pajamas, cooking and baking amazing pies just to make others happy.

The Funeral service will be held at The Church of Jesus Christ of Latter-day Saints, Raymond Alberta Stake Center, on Friday, August 19th, 2016 at 10:00 a.m. Interment to follow at the Temple Hill Cemetery, Raymond, AB.