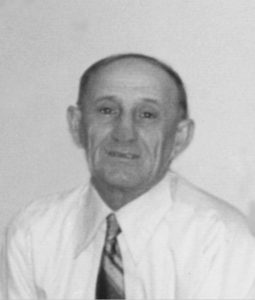 JOSEF GRYSZCZUK SR., cherished father, grandfather, great-grandfather and uncle passed peacefully to Eternal Life at the Chinook Regional Hospital in Lethbridge on August 13, 2016 at the great age of 102.

Joe was born on December 28, 1913 in the small town of Rovno in Russia. As a young man Joe immigrated to Germany and married his wife Rosalie (1940). Surviving the WWII as German immigrants, Joe and Rosie settled in Canada with their 5 children in 1955, first moving to Diamond City, then Picture Butte in 1959. Joe worked in the construction of the irrigation systems throughout southern Alberta and retired in 1978. The couple relocated to Lethbridge in 1994 and became great friends with all the people they met along the way.

Joe lived to enjoy and work in his garden, and took great delight in creating, grafting and maintaining a number of apple trees including heritage varieties from Eastern Europe. Joe also liked to travel and fish in Southern Alberta and Montana, as well as to visit his children in Manitoba and Ontario. A quiet man, a church goer, and a good neighbour – he became more like himself every year.

Joe was predeceased by his wife Rosalie (nee Matejak) in 2002, and two daughters Hanna in 1995 and Sofia in 1943, as well as his parents Ephraim and Hanna, as well as numerous relatives in Ukraine. He will be much missed by his family, daughter Gerda of Ottawa, sons Erich (Jenny) of Brandon, William and Josef Jr. (Joe) of Lethbridge; and also by his granddaughters Lianne and Deanna, grandsons Wayne (Debbie) and Daniel (Tanya), and great-grandsons Alexandre and Christopher.

Thank you to sons William and Josef Jr., as well as daughter Gerda, grand-daughter Lianne, and grand-niece Sharon for all their love and attention throughout Joe’s later years and during his illness. Also, the family extends many thanks to the doctors, nurses and staff at the Chinook Regional Hospital, as well as to the staff at the Good Samaritan Centre in West Lethbridge for their compassion.

Donations may be sent to the Good Samaritan Home or the Chinook Regional Hospital.

Stubborn, persevering, hardworking and honest – Joe was loved by his family and friends.

The bitterest tears shed over graves are for words left

Joe lived a long, good life. He said what he wanted to say and did everything he wanted to do. No tears need to be shed. Joe had a good run!

The Funeral Service will be held at the CHRIST TRINITY LUTHERAN CHURCH, 416 – 12 Street South, Lethbridge, on Thursday, August 18th, 2016 at 11:00 A.M., with Reverend Olivier Ravelojaona officiating.