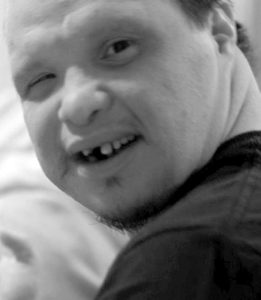 TERRY WILLIAM THORNHILL passed away Saturday, August 6, 2016 surrounded by his family. Terry loved nothing more than making those around him happy. He always knew when you needed a hug or a laugh, even if the laugh was at your expense. Terry exceeded every expectation doctors had for him and overcame so many obstacles, learning how to walk, communicate with sign language and so many other things. He made many friends while attending school, working at the Stirling handicap opportunity program, and working with SASH in Magrath. Terry loved bowling, whether with his friends at work or with his friends at Special Olympics. Terry was blessed to have many wonderful support and respite workers who provided him with tremendous amount of love and support. Those who knew Terry especially his family will tell you what a privilege it was to be associated with him. Terry’s legacy of generosity was able to continue through his donation of organs and tissues to the Southern Alberta Transplant Program. His family and friends will miss his sweet smile and slobbery kisses. He is survived by his father, David Thornhill, his mother, Jackie Thornhill (Rick Dewar), and his sisters, Tisha (James) Gilbert (TJ, Myles and Kezia), Jessica (Chris) Dick (Kayden) and Amanda Thornhill (Chris van Meer) (Adi, Stacey and Layne). Terry was predeceased by his grandparents, Eric and Ada Thornhill and Bryan and Patricia Whitehead as well as his cousin Serena Whitehead. Friends may meet the family prior to the funeral service on Tuesday from 1:00 to 1:45 p.m. The Funeral Service will be held on Tuesday, August 16, 2016 at 2:00 p.m. at The Church of Jesus Christ of Latter-day Saints, KNIGHT STREET CHAPEL, Raymond. Interment to follow in the Temple Hill Cemetery, Raymond. In lieu of flowers, Terry’s family asks donations be made to SASH in Magrath. Donations can be sent to SASH Box 280, Magrath, AB T0K 1J0.

One Condolence for “THORNHILL, Terry William”