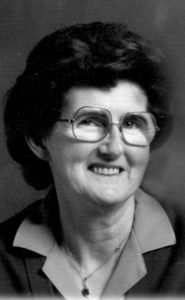 ELIZABETH (nee FOLLIS) PIERCE, beloved wife of the late William H. Pierce, passed away at St. Therese Villa on Sunday, August 14, 2016 at the age of 88 years. She is the loving mother of Carol Anne (Boyd) Sommerfeldt of Calgary, AB, Montie William (Susan) Pierce of Lethbridge, AB, and Kevin James (Sue) Pierce of Vernon, BC. She leaves behind six grandchildren and 19 great grandchildren. She is also survived by her brother, Robert Follis of Raymond, AB. She is predeceased by her husband, William H. Pierce, formerly of Lethbridge. Beth was born in Lethbridge, Alberta on October 22, 1927 and was raised in Raymond, Alberta, by her parents, James Seymour Follis and Tracey Ann Salmon. She met her husband William H. Pierce in Raymond and later married and moved to Lethbridge where they raised three children. Educated in Raymond she later worked at the Raymond Mercantile in her early years. She was active in the LDS church and served in various auxiliaries. She also served with the Home and School Association. Beth loved her family dearly and gave so much to those she loved. She touched many lives with her warmth and kind deeds. The Funeral Service will be held on Monday, August 22, 2016 at 1:00 p.m. at The Church of Jesus Christ of Latter-day Saints, RAYMOND STAKE CENTRE, with Bishop Wayne Smith officiating. Friends may meet the family prior to the service at the church from 12:00 to 12:45 p.m. Interment to follow in the Temple Hill Cemetery, Raymond.