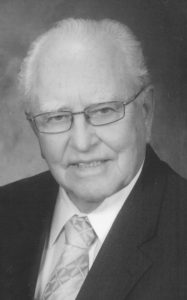 DONALD LEROY CARD passed away peacefully at the Cardston hospital on Friday, August 19th, 2016 at the age of 85. He was predeceased by his father LeRoy Card, his mother Myrtle Webster Card and his brother Howard Card.

He received his Chartered Accountant designation, and in 1955 he opened his own accounting business in Cardston, which he ran until he retired in 2003.

He especially loved spending time with his family and enjoyed camping, picnics and trips to Waterton with them. He also enjoyed spending time doing photography and woodworking.

The Funeral Service will be held at The Church of Jesus Christ of Latter-day Saints, South Hill Chapel, Cardston, AB on Wednesday, August 24th, 2016 at 2:00 p.m. Friends may meet the family on Tuesday, August 23rd at Legacy Funeral Home from 7:00 to 8:00 pm or at the church from 1:00 to 1:45 pm prior to the service. Interment will be in the Cardston Cemetery.