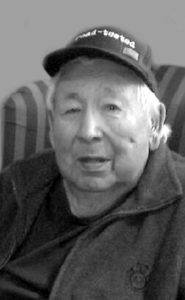 The family of Mr. Henry L. Gerard sadly announce his passing on August 22, 2016. He passed peacefully with his beloved wife Irene Gerard, and family by his side.

He was predeceased by his parents, his three sons Jerry, Arnold and Allister; and his four grandchildren Roland, Kimberly, Michael and Dennis.

Friends and family are invited to pay their respects from 6-8pm on Monday, August 29, 2016 at MARTIN BROTHERS RIVERVIEW CHAPEL, 610-4th St. S.

A Funeral Service will be held at 11am on Tuesday, August 30, 2016 at MARTIN BROTHERS RIVERVIEW CHAPEL, 610-4th St. S., with Canon Allan McCuaig, officiating. A feast will follow the burial at EVANGELICAL FREE CHURCH, 4717 24 Ave. S.