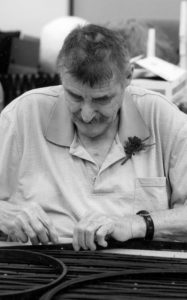 Harvey Henline passed away peacefully at the Willow Creek Continuing Care Centre in Claresholm, Alberta on August 22, 2016 at the age of 74 years.

He is survived by his sisters Edith (Ralph) Fredrick, Maryann Reinhard and brother George Henline. Harvey was predeceased by his wife of 12 years Ruth Henline (nee Wieldon) in 1978, as well as his father Edward Henline, mother Margaret Long and brother Gary MacDonald.

Harvey was born July 21, 1942 on a ranch near Manyberries, Alberta. He was raised in Aden, Alberta and early in his life ventured out to make his own living working in Alberta in the oil patch, on farms & ranches and scrap metal from Olds to Claresholm. Harvey took roots in Claresholm and called it home, where he would take the opportunity to visit with anyone and appreciate their stories while having a sense of humour along the way.

Interment will take place at Sunnyside Cemetery in Aden, Alberta on Tuesday, August 30, 2016 at 11:00 am. A Celebration of Life will be held at the Claresholm United Church Lower Hall in Claresholm, Alberta on September 14, 2016 at 2:00 pm with Pastor Stefan Ulrich officiating.

In lieu of flowers, memorial donations may be made to the Prairie Winds Clubhouse (P.O. Box 1354 Claresholm, Alberta T0L 0T0)

Condolences may be forwarded to the family at www.willowcreekfuneralhome.com