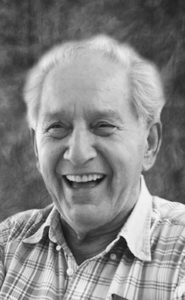 Couttso was born in Lethbridge on November 17, 1929 and was raised ‘down Number Three’. He never forgot his humble yet colourful beginnings in that neighbourhood and was full of great tales of his early life there. He always attributed his strong and solid work ethic and his appreciation for the simple things in life to his upbringing ‘down Number Three’.

Couttso loved to work and started his work career early in life. Shortly after completing grade eight, he worked on the Mogus Farm in Southern Alberta. Later, his work adventures took him, along with his brother, Beaver, to a farm in Vernon B.C., and later still to a logging camp in the Lower Mainland. Back in Lethbridge, he landed a job with General Construction and later was offered a position with the City of Lethbridge. He stayed with the City, working from the ground up, first as an apprentice and then as a full-fledged electrician for the Electric Department and finally retiring as Superintendent of Construction.

In his later years, when ill-health kept him from being as physically active as he used to be, he would lament, “I just wish I could work…”. At 86 years of age, two days before his passing, he was still saying that. Fittingly, he died doing work that he loved: tending to his amazingly productive tomato plants.

In addition to work, Couttso’s passions were many. He was a great collector of relics from days gone by, and would often spend long hours fixing and retrofitting items that were simply junk to other people. Couttso was an avid reader and a lifelong learner. He loved history books, western novels, philatelic magazines, as well as his beloved seniors’ paper, and the good old daily news.

Despite his infirmities in later life, Couttso always lived with gusto. His laughter was contagious and inimitable. It came from somewhere deep inside, and would fill the room, and all those in it, with sheer delight. He loved well-cooked meals, and his ability not only to savour good food, but to satiate himself with it, was nothing short of legendary. He loved, and looked forward to, his Thursday evening outings for liver and onions with Steam and Davey, his ever-loyal co-conspirators.

He loved the great spreads put on by Kay and Verna, and he thoroughly enjoyed his coffee and people-watching times at Timmie’s with Ross, or Pat and Sissel.

Couttso was a profoundly spiritual, if not traditionally religious, man. He loved and appreciated his family and friends deeply, and was a fiercely loyal husband, father, grandfather, uncle, brother and friend. Kindhearted at the most essential level, Couttso travelled to the beat of his own drummer, and was always, uniquely, his own man. He has left an indelible mark on the hearts of those close to him. His exit from this life leaves an emptiness no one else can fill.

Couttso is dearly loved and will be acutely missed by all his family and friends: daughter, Michaelynn (Frank); grandsons, Gary (Amanda), and Bobby (Kathleen); great-grandsons, Jacob and Owen; brothers-in-law, Dave (Verna), Tom (Linda), Pat (Sissel); very special cousins, Steam and Davey; dear friends and neighbours, Kay and Ross; as well as a significant extended family of nieces and nephews and cousin, Vicky. He was predeceased by his wife, Theresa, his brothers, William and George, and his parents, Fred and Veronica.

While still a ‘kid,’ living and working in Point Grey, Couttso was known to frequent a local church there. Consequently, his coworkers dubbed him, “Angel.” And so it is, now, with hearts full of appreciation for a man well loved, and a life well lived, we bid you, Couttso, “Fly on, Angel, fly on.”