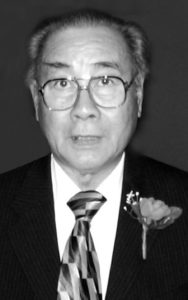 Victor Fee Quon of Lethbridge, beloved husband of the late Anne Wai Kuen Quon, passed away peacefully at the Palliative Care Unit – St Michaels Health Centre in Lethbridge, Monday August 22, 2016 at the age of 88. Victor was born in 1927 and went to school in Canton China. He met his future wife Anne Wong in 1950 and was married soon after as it was love at first sight. They started a family several years later and not long after, Victor went ahead to Canada to find work. Anne, with their first born son John, fled to Hong Kong in 1955 when the Communist government took all their land. Victor came to Canada and his first job was working in a restaurant in Banff. He fondly remembers being there for the filming of the movie “River with No Return” featuring Robert Mitchum and Marilyn Monroe. He moved to Lethbridge to be closer to his Father, Yong Jun Quon, whom he worked with at Lee’s Food Market. He saved enough money to sponsor his wife and first child and be united as a family in Canada in 1959. Victor continued to work in the restaurant business by going into a partnership with some friends and starting the New Moon Restaurant. Victor grew his business by starting another restaurant called Majorette which was popular in the downtown area. Victor retired and sold the business at age 60. Victor enjoyed his sports especially basketball. In his early years, Victor played on Senior Men’s team that won the city championship. After his playing days were over, he remained an avid fan as he would attend as many games as he could fit into his busy schedule. Upon his retirement, Victor was active in the Lethbridge Chinese community. He volunteered his time with the Chinese Senior Social Club which he had the honor of holding both President and Vice President Positions. Victor and Anne travelled back to China several times giving both a chance to reconnect with friends and relative. Victor and his late wife Anne, is survived by his 3 sons John (late Jean), David (late Yvonne, Gina), and Tony (Cindy), grandchildren Nicholas, Alexander and 2 others, two sisters, Kay (Wally) Lee, Susan (late Dick) Dong, living in Alberta. Family and friends are invited to pay their respects at 6:00pm on Friday, September 2, 2016 at MARTIN BROTHERS RIVERVIEW CHAPEL, 610 4 St. S., Lethbridge, AB. A Funeral Service will be held at 2:00pm on Saturday, September 3, 2016 at MARTIN BROTHERS RIVERVIEW CHAPEL. Interment will follow in the Mountain View Cemetery. A Celebration of Life will be held at 4:00pm on Saturday, September 3, 2016 at NEW DYNASTY RESTAURANT, 103 7 St. S., Lethbridge, AB.