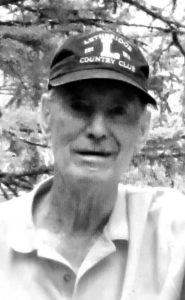 Don was born September 17, 1929 in Calgary, Alberta to Frank and Verna Calder. He moved with his parents to Lethbridge, Alberta at a young age, attending public school and graduating from LCI. He then spent a year at Pickering College in Ontario, then onto Ryerson Institute of Technology in Toronto, graduating with a degree in Retail Merchandizing. It was there that he met and married the love of his life the former Margaret Farr, on April 2nd, 1955. Don worked for his father Frank, at his Lethbridge Ford Dealership before opening Don Calder Interiors, a fine furniture store that thrived for almost 30 years. His greatest enjoyments in life were spending time with his family in Toronto, Buffalo, Calgary and Montana, and travelling with Marg to many different countries.

Don was involved in many community organizations, including the Kinsmen and Gyro Clubs, the Shriners Club and the Lethbridge Curling Club. He also enjoyed golfing with his good friends at the Lethbridge Country Club and always took the time to talk to everyone he met, making them all feel special.

A Private Family service was held.

Family and Friends are invited to a Celebration of Don’s Life at THE COAST HOTEL AND CONVENTION CENTRE, 526 Mayor Magrath Drive S, in the Continental Ballroom from 5:00pm to 7:00pm. on Tuesday, September 6, 2016

Memorial donations can be made to the Alzheimer Society of Alberta and N.W. Territories, High Park Corner, 14925 – 111th Avenue NW, Edmonton, Alberta T5M 2P6 or online, because we need to understand this disease better.