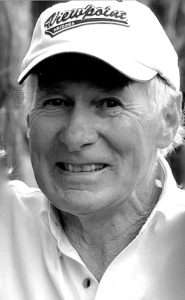 Garry William Perrin, husband and best friend of Rowena Perrin (nee Anderson) passed away surrounded by his family on Monday, August 29, 2016 at the age of 72 years after a lengthy and courageous battle with cancer.

Garry was born in Fort Macleod in 1944. He was a fun loving man of compassion, many interests and great determination, beloved by his family and friends.

He was passionate about his family, farming and his friends. He loved experiencing new places with Rowena with whom he enjoyed several wonderful trips. He spent many years farming on the Blood Reserve as well as running the family farm. He was always a farmer/rancher but also spent time managing the Blood Band farm and owning and operating the Fort Macleod UFA .

Garry’s love for horses was evident in that his last wish was to ride Tess’s black horse. Dad’s doctor said “that he had been dealt a tough hand but was playing it with dignity and strength”. We are so proud of him.

Garry is survived by his wife Rowena of Fort Macleod, three daughters; Dana (Dan) Burrows, Darcee (Nick) Jakovljevic, and Leanne (Richard) Feller. He is also survived by six grandchildren; Bradley, Brett, Dani, Jaime, Tess and Tristan. He will be sadly missed by family, friends, his kitty nurse Rascal and his four legged best friend, Will.

The funeral service will be held at Christ Church Anglican (320 21st Street, Fort Macleod) on Friday, September 2, 2016 at 11:00 am. Donations in Garry’s memory can be made to Juvenile Diabetes Research (JDRF) @jdrfca.donordrive.com