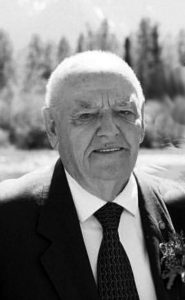 With deep gratitude for a long life well lived, the family of Jacob, announce his sudden passing, August 30, 2016 at the age of 94 years. Dad was born in Orenburg, Russia February 9, 1922 and moved to Canada, arriving in southern Manitoba in 1926. His family moved to Coaldale, Alberta in the spring of 1935. Providing for his family, reading his bible, prayer, and serving others were his life’s priorities. As a young man during World War II, he served Canada as a conscientious objector in forestry camps on Vancouver Island and in the Peace Country. He married his beloved Mary August 19, 1945 and raised a family of ten children on the family farm. David (Lue); Betty (Walter Loewen); Mary (Mark Thiessen Nation); Walter (Neva); Ed (Pat); Alvina (Bevin Buehler); Doreen; Weldon (Heather); Ernie; Richard (Vera). He is lovingly remembered by 44 grandchildren and 42 great grandchildren. There are 104 family members celebrating his life. Dad was predeceased by Mary, his wife of 69 year in 2014. His surviving siblings are his younger brother Ike Thiessen and his brother-in-law Peter Regier. Those near to dad have experienced his grace in their lives and his generosity of spirit lives on as a legacy in those influenced by him. The family would like to thank the staff and volunteers at the Sunny South Lodge for their service to both of our parents; we believe you have benefitted from their time with you as well. Family and friends are invited to pay their respects between 7:00pm and 8:00pm on Monday, September 5, 2016, MARTIN BROTHERS RIVERVIEW CHAPEL, 610 – 4 Street South, Lethbridge. A Memorial Service will be held at 11:00am on Tuesday, September 6, 2016 at COALDALE MENNONITE BRETHREN CHURCH, 2114 – 18 Street, Coaldale, with Pastor Gary Burke, officiating. A private family interment will be held in the Coaldale Cemetery, Mennonite Section. In lieu of flowers, those who wish may make memorial donations to the Mennonite Central Committee, 210, 2946-32 St. NE, Calgary, AB, T1Y 6J7.