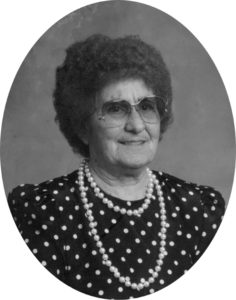 HELEN MARGARET RUSLING (OBEAR), beloved wife of the late Edwin Rusling, of Lethbridge, passed away at the Good Samaritans Park Meadows, on Wednesday, August 31st, 2016 at the age of 92 years.

She was predeceased by her parents, son Wayne and two brothers Howard and Ted.

Helen was born May 3, 1924 to Mr. & Mrs. Horace Bell Obear at Medicine Hat Maternity Home. She received her education in Red Cliff, AB. When finishing her school, war broke out and she worked in the glass factory. She met her husband who was in Canada with the English Air Force at # 34 in Medicine Hat. Helen and Edwin were married Dec. 10, 1943 in Red Cliff. One month later Edwin shipped back to England and Helen followed in July. They remained in England till the war was over and returned to Red Cliff on Oct. 31, 1947. They moved to Lethbridge where Edwin obtained work as a bricklayer and they resided here since. Helen lost Edwin July 7, 1983.

Helen loved to volunteer which she did at the Senior Centre since 1983 and as well at the Lethbridge Regional Hospital. Helen had over 4436 volunteer hours at the hospital as of July 2002.

A Graveside Service will be held at ARCHMOUNT CEMETERY on Wednesday,September 7, 2016 at 2:30 P.M. with Reverend Trevor Potter officiating.