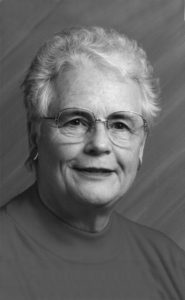 MRS. MARY DOREEN FRASER, beloved wife of Mr. Irving Fraser, of Lethbridge, passed away at the St. Michael’s Health Centre on Monday, September 5, 2016 at the age of 85 years.

Besides her loving husband, Irving, she was predeceased by her brother, Ralph Weber.

Doreen was born in Fort Saskatchewan and was raised throughout Alberta in various towns due to her father being one of the AGT pioneers. Doreen studied to be a draftsperson at SAIT in Calgary and subsequently met her to-be husband, Irving. They were later married in 1952 and were blessed with three children. Doreen truly enjoyed knitting, sewing, baking and painting, and had a special place in her heart for her family and her pet dogs, Cindy & Buddy. She also had a number of close friendswhich she enjoyed spending time with. Doreen had a strong faith and a close relationship with the LDS Church and was looking forward to spending eternity with her husband, Irving. She will be dearly missed.

Relatives and Friends are invited to meet with the family at Cornerstone Funeral Home prior to the Service to pay their respects.

A Private Family Interment will be held at the Magrath Cemetery where Mary will be laid to rest eternally with her husband Irving.

In Memory of Doreen and in lieu of flowers, donations may be made to the Heart & Stroke Foundation – PO Box 2211, Lethbridge, Alberta, T1J 4K7.