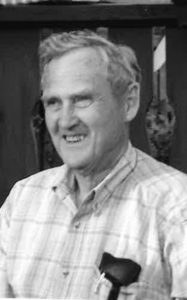 Charlie leaves to cherish his memory his beloved and devoted wife of 61 years Shirley, his sons Murray and Darren, daughters Cathy (Norm) Riley and Alison Lock (Bruce Robertson), grandchildren Ryan, Kelsey (Jamie Wentjarv) and Greg Lock and Taryn, Bradley and Raelyn Riley. Charlie was born on the family farm eight miles southwest of Milk River in 1 – 16 district on October 20, 1927 to parents Philip and Florence (Hovey). He passed away in his 89th year on September 5, 2016 at the High River Hospital. He came into this world as a cherished child and left as a beloved husband, loving father, proud grandfather and uncle. He was the youngest in a family of six children and developed strong bonds with his brothers and sisters: Ruth (Art Mueller), George, Helen (Tony Lippa), Fred (Emily), and Harold (Terry). This helped him cope with the early death of his father in 1936 when he was nine. Charlie attended the one room school John Joe’s and frequently recounted the fun he had there, particularly in the summer months when everyone would get to school early so they could play ball. His love of baseball led to him becoming a decades long fan of the Toronto Blue Jays.

He also attended school in Coutts where he stayed with Helen and Harold and also attended Sampson School south of Burdett where Ruth was teaching. He rode into Milk River for his high school years where he was taught by Erle Rivers, for whom the school is now named. After his schooling Charlie went to work on the Tennant Ranch. There he led the life of a cowboy and had very fond memories of his time with all the other “young bucks”. Perhaps it was his cowboying that made him a Wilf Carter fan. When asked why he left the ranch Dad said he got tired of being broke! He worked in many areas after that; as a farm hand, in fuel delivery, a battery operator, a roughneck, and even becoming a skilled carpenter eventually building the home in Nanton. In 1953 at a dance in Wrentham he was smitten with a beautiful young brunette and decided she must be his. He married Shirley Kemp in ’54. Charlie sold his interest in the family homestead to Fred and their married life took them first to the Sundre country to farm and raise all manner of livestock. It was the most beautiful country he’d ever seen, but they missed the Chinooks and moved down to High River. They briskly had four children between 1955 – 62, Murray, Cathy, Alison and Darren. In ’63, Dad became a part time farmer as he also took on being a grain buyer with Pioneer Grain in Nanton and stayed in this capacity as a valued employee with Richardson until his retirement in 1990. Dad missed playing cribbage with his customers, but enjoyed his pool playing at the Kosy Korner and camping with Mom in the fifth wheel. He had been a charter member of the Nanton Lions Club and also a member of the United Church men’s club AOTS.

Dad grew up during the Depression years and carried lessons of hard work, diligence and integrity into every aspect of his life. His children watched how he lived his life and learned from his example. It was a challenge for us to measure up. Charlie was a man of few words, but a man of his word. His was a handshake that meant something. Dad was a quiet, kind and gentle man who never had an enemy in the world until he had to face a particularly cruel opponent in his later years. He is now at rest from that struggle.

He is, and will remain, deeply loved and dearly missed. “So Dad, go catch Ginger and ride over and see what Floyd and the boys are up to”. A Funeral Service will be held at the Nanton-Parkland United Church, Nanton, on Saturday, September 10, 2016 at 2:00 p.m. Interment to follow at Nanton Cemetery. If desired, in memory of Charlie, memorial donations may be made to The Alzheimer Society. To email condolences, please visit www.snodgrassfuneralhomes.com