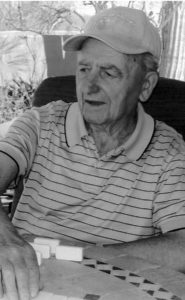 Our dear husband, Dad, Opa, passed away on September 3, 2016 at Norwood Hospice with his family at his side. Tony is survived by his wife of 59 years, Melitta; children, Rose, Bob, and Karen; granddaughter, Emma, and her mother, Marg; as well as various in-laws, nieces and nephews, and their children. He was predeceased by his father, Heinrich, mother, Mathilde, and only brother, Adam.

Born in Kislipo, Hungary, Tony also lived in Beilstein, Germany. Along with his parents, brother, and sister-in-law, he immigrated to Canada in 1953, initially working on a farm in southern Alberta. There he met Melitta and they married in 1956. They lived in Toronto for 10 years, where all of their children were born, but wanted to return to southern Alberta and moved back to Lethbridge in 1966. They remained there for 43 years, until moving to Sherwood Park in 2009 to be closer to their children.

Tony worked for 26 years for The City of Lethbridge as a foreman in the Waterworks Department.

Tony loved fishing in the southern Alberta lakes. He was also an expert sharpshooter and won many trophies and medals through his involvement in the Hubertus Shooting Group of the Lethbridge German Canadian Club. After retirement he enjoyed playing in a senior’s bowling league. In recent years, he loved playing dominoes with family and friends, a game that his granddaughter, Emma, had introduced him to.

A funeral service will be held at Glory Lutheran Church, 22577 Hwy 16, Sherwood Park, at 11:00 a.m. on Saturday, September 10, 2016 with Pastor Markus Wilhelm officiating. Cremation arrangements have been made and a private interment will take place in Mountain View Cemetery in Lethbridge at a later date. We would like to thank Dr. Clark and all the nurses and caregivers at Norwood Hospice for their care and kindness. In lieu of flowers, memorial donations may be made to the Norwood Palliative Care Unit, CapitalCare Foundation, 6th Flr., 10909 Jasper Ave., Edmonton, AB, T5J 3M9.

One Condolence for “SCHLEGL, Anton”

Leave a Condolence for Bev Kultgen