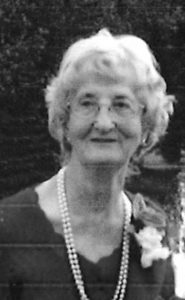 Florentina (Tina) Wojtowicz passed away peacefully on Monday, September 5th, 2016, at Lethbridge Regional Hospital, at the age of 84 years, beloved wife of Tony Wojtowicz. Tina was born January 7th, 1932 to Joseph and Florentina Materi in Fox Valley, Saskatchewan. She moved to Lethbridge, Alberta, met and married Tony in 1950. They had 2 sons and 2 daughters all born in Lethbridge and later moved to High River where they spent the next 45 years. Tina worked various retail positions as well as owned and operated a Restaurant Business for a number of years. Tina took great pride in the successes of all her family and was always there to support them. Besides her loving husband Tony, Tina is survived by her sons Gary (Judy), Dale (Carol) and daughters Rita (Vern) Pugh, Sande Falk and numerous grandchildren, great grandchildren, and one great great grandchild. Also left to mourn is her sister Eva (Jack) Dafoe and brother John Materi as well as numerous brother and sister in-laws, nieces and nephews. Tina was predeceased by her parents, eight brothers and two sisters. Vigil Rites (Prayers) will be held at 7:00pm on Thursday, September 8, 2016 at MARTIN BROTHERS RIVERVIEW CHAPEL, 610-4 St. S., Lethbridge, AB, led by Deacon Frank Peta. A Funeral Mass will be held at 11:00am on Friday, September 9, 2016 at ST. BASIL’S CATHOLIC CHURCH, 604 13 St N, Lethbridge, AB, with Father Lukas Drapal, celebrant. Interment will follow in Mountain View Cemetery. For those who wish, in lieu of flowers, memorial donations may be made to the Parkinson’s Society of Southern Alberta, 1254-3 Ave S. Lethbridge, AB T1J 0J9.

One Condolence for “WOJTOWICZ, Florentina”