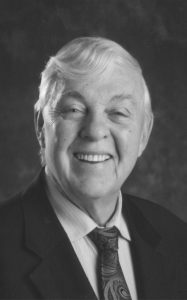 Mr. Clarence “Barry” Fawcett of Lethbridge, beloved husband of Mrs. Yvonne Fawcett passed away in Lethbridge on Saturday, September 10, 2016 at the age of 79 years.

Barry was born June 20th, 1937 in Portage la Prairie, MB when you could buy a new home for $4,100.00, a new car for $760.00, and gas was 10c a gallon. He and his younger brother, Don, had a good and happy childhood centered around the Salvation Army church where he learned to play in the band.

At age thirteen he moved with his parents, Clarence and Violet, to Calgary where he attended Balmoral Jr. High School, then Crescent Heights High School where he enjoyed success as a bandmember and Sr. football player…the rest he tolerated.

Barry continued his association with his church, the band, and made many friends. A big bonus was meeting a lovely young lady from Hanna, a plumber’s daughter, who he turned into a Fawcett and with whom he was to spend the next 57 years. Together he and Yvonne produced three sons who begat 13 grandchildren.

Family was very important for both Barry and Yvonne and they relished family gatherings where all members would get together for fun and fellowship. At these gatherings they lived up to the family motto, “It’s Fun To Be A Fawcett”.

Upon leaving high school Barry worked with his father in direct sales with Watkins Products, and after the passing of his father in 1966 he took over the distributorship of Watkins Products for the city of Calgary. In 1972 he went to work for Calgary Tent & Awning Co. until 1989 when he and Yvonne purchased Lethbridge Custom Canvas Ltd, where he worked until retirement in 2003.

Barry was involved in his community for 20 years as a Cub Scout leader, Assistant Little League coach for 3 years, and executive member of Winston Heights/Mountainview Community Assn. in Calgary for 10 years. He served on the Lethbridge Evangelical Free Church elders’ board for 6 years, their Missions Board for 6 years, and the National Evangelical Free Church Missions Board for 6 years. He welcomed people into his heart and home and was generous to those in need, reaching out to many.

Family and friends are invited to pay their respects between 4:00pm and 5:00pm on Wednesday, September 14, 2016 at the MARTIN BROTHERS RIVERVIEW CHAPELS, 610 4th Street, S., Lethbridge, Alberta.

Interment was held prior in the Mountain View Cemetery.