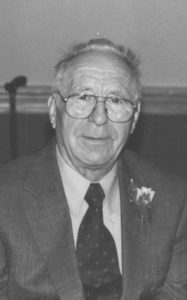 Mr. Karl (Heinz) Goebelhardt of Lethbridge, beloved husband of the late Mrs. Margarete Gretel Goebelhardt, passed away at the Chinook Regional Hospital on Saturday, September 10, 2016 at the age of 89 years.

He was born in Germany and moved to Canada in 1955 with his wife and two daughters. Heinz was the owner/operator of Schulz Painting, he was a painting contractor for many years until his successful retirement. He was the most wonderful father and Opa to many. He always had a listening ear and wise words of advice for any of us who popped by for a visit. He then spent 28 years travelling to Hawaii and Germany with his beloved wife Gretel who passed away Mach 11, 2012. Heinz was a board member and very proud to be involved with the German Canadian Club in his younger years. He enjoyed cooking for his family and was a master baker. His specialties were rye bread, apple or plum cake and his secret cheesecake recipe along with his famous potato pancakes.

He was predeceased by his three infant sons.

Heinz leaves behind a masterpiece of a family they created. He truly did his upmost best for all!

As per Heinz’s request, there will not be a funeral. Please join us in a “brost” with some good German beer in memory of our Father and Opa.