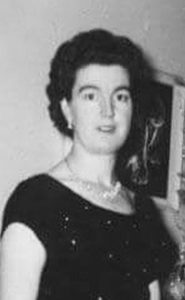 MYRTLE ILEEN JACKSON, formerly of Lethbridge, passed away peacefully at the Raymond Health Centre, on Sunday, September 18, 2016 at the age of 87 years.

Myrtle Jackson, the beloved wife and mother was born in Osage, Sask. in 1929.

She was predeceased by her first husband Beatty Jackson in 1978, her beloved son Kenneth Jackson 1992, and grandchild Chilton Thur Jackson in 1989.

She was loved and will be missed always.

For those who wish to attend, please meet at the Eternal Flame at 1:00 P.M.