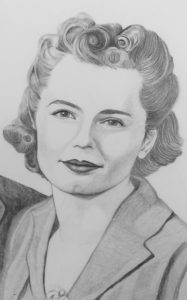 Mrs. Dorothy Dick of Lethbridge, beloved wife of the late Mr. Jack Dick, passed away at the St. Therese Villa in Lethbridge on Friday, September 16, 2016 at the age of 93 years.

Dorothy Lydia Dick was born September 26, 1922 to O.T (Thorwald) and Sorena Nielsen at Calgary, Alberta. She was a stay-at-home Mom who raised 5 children. Gregory Dick (June), Clayton Dick (Claire-deceased), Graham Dick (Paula), Lorene Dick and Valorie Nielsen-Dick. She has 11 grandchildren and 12 great-grandchildren. Dorothy also served as “Worthy Grand Matron” of the Order of the Eastern Star and is a Past President of the John Howard Society. She attended and graduated in 1968 with the first Journalism class at the Lethbridge Community College. Dorothy loved to play Bridge and Scrabble. She was predeceased by her husband Jack, her parents, sister Marion and brother Sonny.

A Funeral Service will be held at 11:00am on Saturday, September 24, 2016, at the ST. AUGUSTINE’S ANGLICAN CHURCH, 411 11 Street S., Lethbridge, AB., with Canon James Robinson, officiating. Cremation will follow.

Flowers are gratefully declined. Those who wish, memorial donations may be made to the Canadian Cancer Society, 317 – 10 St. S., Lethbridge, AB T1J 2M7.