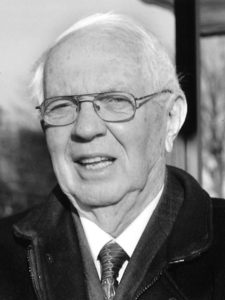 With regret, we announce the passing of our father, father-in-law, grandfather, uncle, cousin and friend, W. PAUL MADGE of Milk River, Alberta on September 21, 2016 at the age of 90 years. Paul was born June 17, 1926 to Edna Coffin Madge and W. Martin Madge. The fourth of five children, Paul was centered in his home town and is well remembered as “Paul Madge from Milk River.” He lived a full life, taking over Madge Equipment from his father as a young man, becoming a pilot at age 26, town Mayor the following year and a dedicated businessman with a passion for his local area. Paul was most excited when interacting with the world around him. He was an avid fisherman and hunter, a dedicated collector, a social butterfly and insistent dancer, lover of the outdoors and committed friend.

In 1956, Paul married Nola Matkin of Magrath and they welcomed three children in to the family fold, Martin 1958, Bruce 1960 and JoEllen 1961. As a young family, they became Charter members of the Alberta chapter of Flying Farmers. This brought many adventures through the years, as well as life-long friendships all around North America which lasted a lifetime.

Selling his business in 1975, Paul redirected his energy into real estate and enjoyed managing that through the rest of his life. After retirement, he served a decade on the ADC Board for the Alberta Government. In his down time, Paul loved spending time at the family cabin in Waterton, hiking and berry picking with his grandchildren and other family, rowing across a lake or visiting with his sister across town. This was reminiscent of his early days spent at the original Madge cabin with all manner of family and friends coming and going. He always loved a good crowd!

Paul is survived by his children Martin (Michelle) Madge, Bruce Madge, JoEllen (Geoffrey) Cushing and grandchildren Victoria, Kennedy and Catherine Madge, Derek, Kirk (Molly), Corie Jo and Janna Lee Cushing. He is also survived by many nieces and nephews and great-nieces and great-nephews whom he held very close and dear to his heart.

The family wishes to invite anyone who would like to join them at the graveside service being held at the MILK RIVER CEMETERY on Saturday, October 8, 2016 at 11:00 A.M.., followed by a noon meal at the Milk River Civic Centre, where we can all share stories and memories of the Paul Madge we remember.