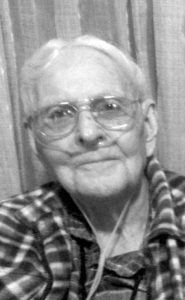 Our Dad has been reunited with his beloved wife Frieda and other loved ones on Sunday, September 25, 2016. He passed away peacefully with his family by his side at Legacy Lodge. Mac is lovingly remembered by his children Sharon, Deb, Glenn, and Jan & Albert Catterson; sister Amy Johnson; 9 grandchildren; and 11 great-grandchildren; 1 great-great-granddaughter; as well as numerous nieces and nephews. Mac was predeceased by his parents; his son Randy; grandson Shane; and 3 sisters. Clifford was born to parents Newton & Julia McLaren. They came to Rolling Hills from Arena, Saskatchewan in 1940. In 1954 Mom & Dad moved to South Bantry, where Dad farmed a quarter section of land. In 1964, Dad took a job as ditch-rider for E.I.D. for 12 years. Dad’s love for his land showed by the many fine fields he grew. His dedication and compassion to his family was remarkable and that extended to his neighbors and anyone he knew. Always willing to lend a helping hand, our dad was a loving, gentle, strong, and wise man. Dad will be remembered for his love of music, the guitar and banjo. His gift for dancing; nobody could dance like him. He taught us all how to dance, and tried to teach some of us to play instruments but mom and him were so gifted. We all have happy memories of music, dance and laugher from the basement at the farm. His love for his grandchildren showed immensely when they built the treehouse. The long weekend campouts at the farm, and teaching them to ride the horses, or drive some machinery. Dad’s interests were watching curling, baseball Blue Jays and the Calgary Stampede. He was the best father and grandfather. You will be missed. Thanks for the memories that we will hold close to our hearts. A Funeral Service will be held at 2:00pm on Saturday, October 1, 2016 at the ROLLING HILLS COMMUNITY HALL. Interment will follow in the Rolling Hills Cemetery. In lieu of flowers, memorial donations may be made in Clifford’s name to STARS, PO Box 570, 1441 Aviation Park NE, Calgary, AB T2E 8M7 or to the Canadian Cystic Fibrosis Foundation, 1130F 44 Ave. SE., Calgary, AB T2G 4W6. A huge thank you to the Legacy Lodge staff for their care and loving support they gave our father.