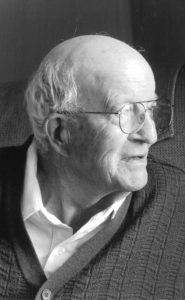 LYLE MOONEY, beloved husband of Anne Mooney, passed away at the Chinook Regional Hospital on Tuesday, September 27, 2016 at the age of 85 years.

Lyle was predeceased by his parents Jack and Maude, brother Gerald and sister Dorothy.

Lyle was born in Wardlow/ Cessford area, AB, on October 27, 1930, where he grew up and farmed and ranched as well. Later, he ran a hotel in Barons, AB, and Lyle also worked for the City of Calgary. He returned to farming in the Peace River area, before retiring to Granum, Lethbridge and finally Coaldale, where he resided until his passing.

Lyle enjoyed making soup, collecting vintage items and telling humorous stories of the past. He will be greatly missed.

At Lyle’s request, no formal funeral service will be held.

In memory of Lyle, donations may be made to the Heart and Stroke Foundation, PO Box 2211, Lethbridge, AB, T1J 4K7.