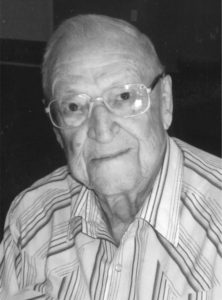 MR. WILLIAM “BILL” KANE passed away peacefully at the home of his loving daughter-in-law in Monarch, AB on September 26, 2016.

Bill was predeceased by his wife of 58 years Dorothy (Roberts) Kane, and two sons John (Marjorie) and Doug (Susan).

He is survived by his two daughter-in-laws, Marjorie Kane and Susan Kane; his grandchildren, Angela Plettell, LeAnne Malchow, Lisa Hall and Jennifer Kirsch, as well as several great and great-great grandchildren. He is also survived by two contemporary cousins, Margaret Roberts and Bill Henderson Sr. whom he loved very dearly.

Bill had a very full life, having farmed for 20 years and having worked as a counselor and teacher for 23 years. He was a past D.D.G.M. of the Masonic Lodge in Alberta, a life member of the B.P.O.E. and a proud 72-year member of Branch #4 of the Canadian Legion.

By request, there will be no funeral service held.