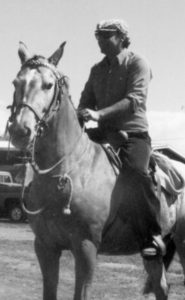 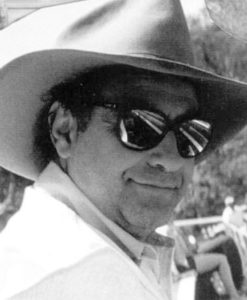 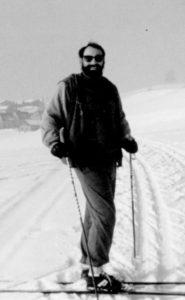 THOMAS RICHARD ERDMAN, of Barons, beloved spouse of Anne- Marie Erdman, passed away peacefully at St. Michael’s Health Centre – Palliative Care Unit on Wednesday, September 28, 2016 at the age of 63 years. Wrongfully accused Argentinean jail escapee, award recognized film director, and first ascensionist of Mount Kintla, the third tallest mountain in Glacier National Park, Montana, everything about Thomas Richard Erdman was, how he’d like to say, : “just peachy”. Being strong-willed, but free spirited, he was a man that truly understood the essence of life. Married to the light of his life, and best friend, Anne-Marie, they lived a fast paced life, always finding themselves either sipping French wine in Paris with the extended family, or making a life as they raised four children on the family farm: Celina, Jean-Victor, Augustine, and Raphaelle. Tom started off his schooling days at the Barons School from grades one through nine, and then graduated from Lethbridge Collegiate Institute where he spent most of his time on the football field. He then went on to the “Bozeman Ranching College” in Montana where he proceeded to learn what the Wild West was truly about: cattle, ranching and of course, the art of shooting guns. This schooling would help him throughout his life as he worked with his father on the family farm, but even more so as he would eventually start running it himself, as the third generation of Erdman’s that have done so to date. In the early 90’s, he was appointed as a member of the board of governors for the Alberta College of Art and Design for his contributions and hard work within the art and film community. This was well deserved, as he had attended the Banff School of Fine Arts Film School where he seemed to have a keen sense of creativity, and a natural talent in making films and documentaries. By pursuing such a craftsmanship he worked on the Walt Disney movie ‘The Journey of Natty Gann’, and directed three films: ‘The Dream’, ‘Pincher of Peace’, and a short vignette that won him an Alberta Film and Television Award: ‘One With Wood: The Making of Wood Skis’. He also co-founded the Pincher Creek Film Society and the World Aboriginal Film Festival with his good friend but more so partner in crime, Larry Becker. An avid world traveller, he spent much of his time abroad traveling by the seat of his pants, making memories, and collecting stories to tell once he came home (many featuring his travel partner Zan Gullickson). Starting with two trips to Europe, first one to Iceland and London, and then the second one where they cycled from Luxembourg to Athens, sold their bicycles to then be able to visit Turkey, Greece, and Corfu via public transport. It was in 1978 that they went to Israel and lived with the Bedouin-Arabs where they camped on the Red Sea, scuba dived, and fished daily for their meals. He also hitchhiked through Peru, Bolivia, Brazil, and Argentina, where he learned most of his Spanish from the inside of a cell with his Argentinean freedom fighter friends. Bali. Fiji. Nepal. Need we say more? In his spare time, he couldn’t be found. He was as an active member of the Alpine Club of Canada, he was a frequent climber, skier and mountaineer, He officially set the first route on Mount Victoria found on the Alberta-BC border as registered in the Alpine Guide of Canada, and spent time climbing in New Zealand and in the Cordillera Negra in Peru. He passed on many of his passions, and teachings to his children, skiing with them regularly. Though he was a well travelled man, his favorite place to be was on the farm in Barons Alberta where he spent countless hours tending his cattle, farming his land, and above all being with his family. We will forever cherish all of our memories, thank you for your constant love, unwavering support and inspiration to all; you will be dearly missed. A celebration of his life will be held in his favorite playground, Waterton Lakes National Park, this upcoming spring.

Leave a Condolence for Lauren and Brian Baker