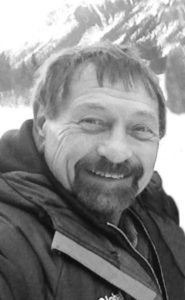 ANDREW “ANDY” JOHN KRAJEWSKI left us to be with the Lord on Wednesday, September 28, 2016, at the age of 66 surrounded by those that loved him, on a beautiful and calm fall morning. He goes now to join both his parents, and three brothers; John Joseph, Glen and Kenny.

Dad was born in Lethbridge, to John and Rose Krajewski on September 2, 1950. He graduated from Catholic Central High School, and then went on to attend university in Missoula, Montana. He had numerous careers throughout his life; working for Fish and Wildlife before joining the Environmental Sciences Department at the Lethbridge Community College. His passion for videography and self taught skills were applied to many years working and volunteering with The Miracle Channel where he was fondly referred to as “Andy Cam”. He transitioned to Global Lethbridge, there he enjoyed the fast pace of tracking the days current events. After his retirement, he took a position working at the Coaldale Food Mart. Dad would probably say that the people he met and worked with made him the richest person you would ever know. As if all of this wasn’t enough, he co-founded a videography company called Wild Moose Media where over the years he further honed his craft, and the headroom in his shots was always perfect. Finally, what he was most known for… “Andy’s Glads”. He was a gifted hybridizer and created many of his own varieties, always quick to inform that the gladiolus was the official flower of Lethbridge. He put his heart and soul into every single stem, his love for them evident to anyone who saw them.

Dad will always be remembered for his joviality, unending kindness, generosity and compassion. He would give you the shirt off his back, cause nothing mattered to dad more than his relationships with other people.

He will be lovingly remembered by his son, Daniel (Angela) Krajewski. He is survived by his sister Liz (Al) Beeber, his brothers Ed (Marlene) Krajewski and Rick Krajewski (Alex) as well as their families. He also leaves behind two aunts, numerous cousins and many friends, friends that he loved and valued like family.

He left us too early, but as dad would say “If it’s my time, it’s my time.” He kept his battle with cancer very private, as would be his way. Rather, he would want you to remember the Andy that he was; a nature lover, fisher, music guru and the life of the party.

A Celebration of Andy’s Life will be held at CORNERSTONE FUNERAL HOME on Monday, October 3, 2016 at 11:00 A.M. with Pastor Ralph Molyneux, officiant.

In lieu of flowers, the family asks that you make a donation to Compassion Canada, 985 Adelaide Street S, London, ON, N6E 4A3.