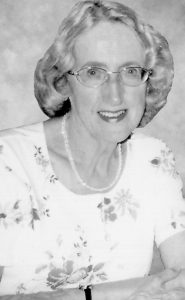 Mrs. Nellie Mann of Lethbridge, cherished wife of Dr. George Mann, passed away peacefully on Sunday, September 25, 2016, at the age of 85 years. Nellie was born at the Galt Hospital in Lethbridge July 10, 1931 to Cornelis and Gertruida Dogterom. She was raised on the family farm near Lethbridge until 1948 when the family moved into the city. Nellie attended Maclean School for Grades 1 – 6, White School for Grade 7, Central School for Grade 8 and the LCI for Grades 9 – 12. She learned to play the piano at a very early age and often played for Maclean School dances. Nellie married her high school sweetheart and best friend, George in August 1952. They lived together in Edmonton for a year and then moved to Lacombe where George had accepted his first teaching position. Nellie and George moved back to Lethbridge in 1956 where they took up permanent residency in the Lakeview area. Nellie became a resident of a memory care unit at St. Therese Villa in December 2013. Nellie was a devoted wife and mother; her main focus being her family. Her entire married life was dedicated to meeting the needs and concerns of her family. She was an excellent cook, homemaker, and seamstress. Nellie and George spent many hours together planting and tending to their sensational garden. They also enjoyed their many camping trips to the Pacific Northwest, especially the Oregon coast. Nellie was also motivated by her love of the arts and English literature. She was a prolific reader and scholar., excelling in numerous courses at the University of Lethbridge while maintaining a 4.0 GPA. Although Nellie enjoyed sketching, she was mainly involved in musical and dramatic activities. Nellie had a rewarding career teaching piano lessons in the home. She volunteered many hours coaching school vocal soloists and assisting in the classroom. Nellie volunteered as an accompanist for the McKillop Church operettas. She was a member of the McKillop United Church Choir, the University of Lethbridge choir, and an original member of the Lethbridge Symphony Choir. Nellie was an Honorary Lifetime Member of Playgoers of Lethbridge – serving on the Executive, acting as assistant director for three major productions, participating onstage and backstage occasionally, and accompanying Playgoers’ activities when necessary, for example “Priscilla Pringle’s Predicament”. The late Murray Robison cast Nellie in the role of Mama in Attic Theatre’s 1978 production of “Papa Is All” and maintained that she was an extremely “natural” actor. Nellie possessed a wonderful sense of humour and remarkable creativity. She was the “rock” of the family and will be missed by all who knew and loved her. Besides her devoted husband of 64 years, George Mann, Nellie is survived by her daughter; Debra (Calvin) Logan, of Lethbridge; and two sons; David (Janet) Mann, of Burnaby BC, and Darin Mann of Lethbridge; her grandchildren Elizabeth “Elisha” Mann, of New Westminster BC, Derek (Alyssa) Logan, of Grande Prairie AB, Kathleen Mann, of Burnaby BC and Patrick Logan, of Lethbridge; as well as numerous nieces, nephews and their families. Nellie was predeceased by her parents Cornelis and Gertruida Dogterom (nee Van Lith), brothers, Jack, Roy and Bob Dogterom, her beloved daughter Laurin Mann, and grandson Matthew Logan. A Celebration of Nellie’s Life will be held at 11:00am on Saturday, October 8, 2016 at MCKILLOP UNITED CHURCH, 2329 15 Ave S, Lethbridge, AB., with Reverend Trevor Potter and Canon James Robinson, officiating. In lieu of flowers, memorial donations may be made to the Heart and Stroke Foundation (Calgary Office), 119 14 St. NW #200, Calgary, AB T2N 1Z6.