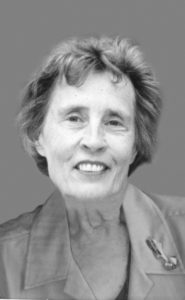 Anna Marie was born July 8th, 1936 in Westmoreland, Prince Edward Island. She spent her early years growing up on the family farm, attended Prince of Wales College and later obtained her teaching certificate. After teaching in P.E.I. from 1956-1960, the desire to pursue her teaching career pushed her west to Alberta where she began working in a rural school in Cluny, Alberta. It was at this time Anna Marie met her future husband Eugene, also from Prince Edward Island.

Eugene and Anna Marie married on December 30, 1961 in Carstairs, Alberta. They relocated to Calgary shortly thereafter to start their family and their construction companies, Eugene Sullivan Building Ltd. and Starlight Enterprises. Working as a team, Anna Marie and Eugene continued their life path with moves to Lethbridge and then Phoenix, Arizona. The lure of family and friends brought them back to Lethbridge in 1981, where they resided for the remainder of their married life.

Anna Marie’s strong faith, compassion and selflessness touched many lives. She was a sincere advocate of community, charity and volunteerism, engaging both time and resources in the Terry Fox Run, Al-Anon, Meals on Wheels, the Catholic Women’s League, the John Howard Society and Cancer Centers for many years. We will truly miss the loving influence she had in all of our lives.

A Funeral Mass will be celebrated at OUR LADY OF THE ASSUMPTION CATHOLIC CHURCH – 2405 12 Avenue South, Lethbridge, AB on Tuesday, October 11, 2016 at 2:00 P.M., with Father Kevin Tumback, Celebrant.

One Condolence for “SULLIVAN, Anna”