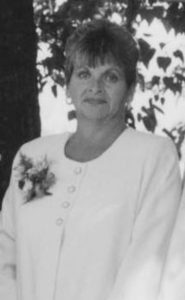 Gayla was predeceased by her mother and father, John and Donna Bair and son, Layne Gilborn.

Gayla married Stewart Gilborn in 1964. They originally settled in Lethbridge where Stewart completed his teaching degree. From there they headed to central Alberta, settling in the small village of Evansburg, west of Edmonton. After a few years there, they made the move to a much larger centre, Edson, even further west of Edmonton. Here they spent many years with Gayla raising the children while they participated in organizations like the Kinsmen and Kinette Clubs; also enjoying the endless daylight, rain and mosquitoes of summer and very long cold winters. Over time Stewart’s rise in the educational world allowed them to make the move from the north-country to Brooks which would turn out to be home for the family for many years to come.

Once the children were settled in Brooks, Gayla began to develop a career for herself with the Avon Company. She started as a basic sales person, covering not only Brooks but a very large area including many towns and villages as far off as Drumheller to the northwest and Rolling Hills to the south. Gayla’s talents not only as a good sales person but also as strong organizer and coordinator were soon recognized by the company and she was given an expanded role as territory manager and recruiter, twice earning the Circle of Excellence #1 Manager in Canada.

From there she went on to a very successful career as Home Care Manager where she enjoyed the respect and friendship of her many colleagues and clients.

Gayla’s pride and joy were always her family, loving her grandchildren dearly, holding a special place in her heart for each and every one.

At Gayla’s request there will be no formal funeral. A private interment will be held at Archmount Cemetery. A celebration of her life will be held for family and friends at a time and location to be announced. In lieu of flowers, a donation to the charity of your choice would be appreciated.