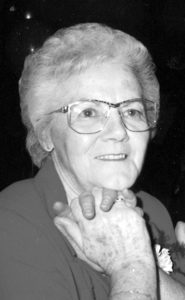 It is with great sadness we        announce the passing of Isla Larue, wife of the late Angus Larue on Tuesday, October 11, 2016 at the age of 92 years.
Isla was born in Swift Current and grew up in Shackleton, SK.
Isla and Angus married in 1947 and later moved to Lethbridge. Both Isla and Angus were avid curlers andIsla was a past President of the Lethbridge Ladies Curling Club.
Isla will be lovingly remembered by her children Randy (Wendy), Shannon (George) Federkeil and Ryan (Michelle); her grandchildren Michael (Sara) Larue, Kevin (Tracy) Larue, Scott (Nicki) Federkeil, Rob (Noelle) Federkeil, Dustin Larue; and 7 great-grandchildren.
Also left to mourn are her sister Elva Dutton and brother Eny (Faye) Mitchell and their families.
The family would like to thank the staff of 2nd West and 2nd East St. Michaels Health Care Centre.
Flowers are gratefully declined. Those who wish, memorial donations may be made to the Alzheimer’s Society, #402, 740 – 4 Avenue South, Lethbridge, AB  T1J 0N9.
A Graveside Service will be held at 1:00pm on Thursday, October 13, 2016 at the MOUNTAIN VIEW CEMETERY with the Salvation Army officiating.