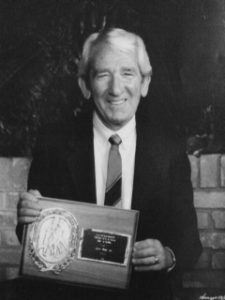 “Fathers hold their children’s hands for just a little while but hold their hearts forever.”

“My father gave me the greatest gift anyone could ever give another person, he believed in me.”

JOHN “JACK” CARL LILJA, beloved husband of the late Beverly Fay Lilja passed away peacefully, surrounded by his ever-loving family on October 15, 2016 at the age of 86 years old.

Jack “Red” Lilja was born in San Francisco on September 22, 1930, the middle child and only son of Gustav and Elaine Lilja. He married Beverly, the love of his life, on March 22, 1951 after meeting in the gym of the Civic Center where he was playing basketball with a travelling team from San Francisco. They eventually settled in Lethbridge and shared 48 wonderful years together. During these 48 years, they were blessed with 4 daughters and a son. Left to honour him are: Lanell Chesko and her children: Jason (Lisa), Becky and Aaron; Lorell (Alvaro) Zanolli and children: Josh (Breanna) Zanolli, Jeff (Kareena) Zanolli, and Janna (Shawn) Ogertschnig; Leslie (Perry) Rasmussen and children: Adam (Kristen) Gyorfi, Jaimee (Tom) Penner and Kayla (Shaun) Courtney; Lynette (Clarence) Taal and children: Lauren and Cassidy Taal and son Jack Lilja Jr., 16 great grandchildren, 6 step children and numerous nieces and nephews.

“Red” grew up on the playgrounds of San Francisco. He had to scrounge and save every day to find ten cents to “buy” into the basketball games on the outdoor courts where he competed against many future ABA/NBA athletes. This is where he picked up the nickname “Red” because of his red hair. When he was young, his Uncle Billy (a World Series champion with the New York Giants) was pushing him to play baseball but even in childhood, the love for the game of basketball was evident. Basketball brought him to Canada and he imparted his passion for the game to his children, and they in turn passed on the love of sport to his grandchildren and eventually his great grandchildren. Sport and competition is who the “Liljas” are and that all came from Dad. When we are all together we are playing some sort of game whether it be in the gym, at the skating rink, in the bowling alley, on the baseball field, at the Sugar Bowl or at the kitchen table. He was the proudest father, grandfather, and great grandfather that there could ever be. He would always say “There is no better family than this one!”

He was a determined, hard worker who possessed a ‘never give up’ attitude and emphasized the importance of ‘doing it right’. These were all lessons he learned from growing up on the streets of San Francisco and from playing the game of basketball. These lessons drove him to success as a businessman and an athlete. He was best known for being an integral member of the local basketball powerhouses, the Broders and Chinooks. He also captained the Canadian Men’s National team. Whenever we would travel around town, he was constantly stopped by people who had seen him play or heard the games on the radio and he would always stop and chat with them. Even to this day if people hear his name, they will have some sort of comment on how good he was and how much fun it was to watch him and his teammates. Playing on these teams also provided him the opportunity to travel the world. He was inducted into at least 5 Hall of Fames both in Canada and the United States but one of his proudest moments was to be inducted into the U of L Hall of Fame with his children. He made lifelong friends with his teammates and it was always a treat to see these men interact later in their lives. Dad worked at Broder Canning Co. and then completed his professional career working for many years at CFCN-TV until his retirement.

Dad was as successful a father/grandfather as he was a businessman and athlete; his stubborn determination was always evident. He had some infamous behaviors that we will always hold dear. When we were little and needed to come home from playing outside – he would stand on the front step and whistle a distinct tune that signalled it was time to come home. If he did not like something he would make this “clucking” sound with his tongue. Punctuality was essential and if he had to wait even a minute (which, with 4 daughters, was inevitable) – he would stand at the front door with his hands in his pockets and jingle his change. When he retired from playing and was watching his children compete – he would wear out a path in the top rows of the bleachers pacing back and forth. He did not believe in being hurt or injured and taught us all to “Get Up” and keep playing; “Let it hurt tomorrow!”. He coached for the U of L Women’s team and he also tried his hand at reffing (that did not last long)! He was always making us laugh as his wit was as quick as his hands and feet.

Dad moved back to San Francisco in 1999 and married his high school girlfriend, Val Bradley. They enjoyed 14 years together until Val’s passing in 2013.

Jack was predeceased by his wife Bev, his parents Gustav and Elaine Lilja, his sisters Mary Earnshaw and Vera Lou Lilja, a grandson Walter Chesko, and his second wife Val.

We all feel profound admiration and are incredibly blessed to have been loved by this extraordinary man.

At Dad’s request, no funeral will be held. A private family service will be held at a later date.

In lieu of flowers, those who wish may donate to: KidSport Lethbridge, 1001 3rd Avenue South, Lethbridge, AB, T1J 0J3, www.kidsportcanada.ca/alberta/lethbridge-taber/