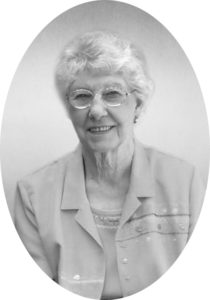 Effie, affectionately called “Sis” by many family and friends, was predeceased by her beloved husband, Charles Edward “Chick”, in 2007, and devoted son, Arthur James “Jim”, in 2008; father Edwin Merril “Ed” Waddle, in 1972, and mother, Lena Olava “Nellie” (Larson) Waddle, in 1974.

Effie grew up on the family farm and received her public schooling in the Retlaw area. After their marriage, because of Chick’s career in education and his military service, they moved frequently. These moves took the family to Retlaw, Edmonton, Grassy Lake, Turin, Coaldale, and to Lethbridge, in 1965. Upon their move to Lethbridge, Effie attended the Henderson’s Business College. She began work as a Chiropractic Assistant and over a period of twenty years worked for three chiropractors in the City of Lethbridge.

Her family was everything to her and she was a devoted mother and grandmother and when great-grandchildren came along, that was just the most terrific thing in the world to her. An important part of her life has been her continued connection with the Waddle – Broderson families. She so enjoyed the yearly family picnics, the phone calls, the visits, and the dinners with them. Her special friendship and bond with niece, Lorraine Johnson, has been a blessing for her.

Effie made friends everywhere she lived and treasured and maintained these friendships. Effie and Chick were avid square dancers, campers and they traveled extensively in their retirement. They were active in many local activities and volunteer work. Effie’s exceptional handiwork is admired and cherished by her family and friends. She became an avid scrapbooker and filled many books with pictures and descriptions of family, friends, and travel helping to keep our family history recorded for generations to come.

Her affiliations have included: the Eastern Star, Grassy Lake and Coaldale United Churches, United Church Women, Lutheran Church of the Good Shepherd, and Sons of Norway.

A Memorial Service will be held in celebration of Effie’s life at the LUTHERAN CHURCH OF THE GOOD SHEPHERD, 2406 – 11th Avenue South, Lethbridge, on Saturday, October 22, 2016 at 2:00 P.M. with Pastor Tom Peterson officiating.

If so desired, memorial tributes may be made to the Church of the Good Shepherd or to a charity of your choice.